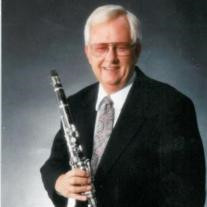 Jerry Max Toler, 71, was born July 1, 1941, in Enid, OK, to Clarence Toler and Gladys (Rubick) Toler. He passed away peacefully with his family by his side on December 28, 2012. Jerry attended high school in Enid. He received a Bachelor of Music Education Degree from Midwestern University, Wichita Falls, TX, and earned his Masterâ??s Degree at Western State College of Colorado.Jerry was all about band. While he was finishing his degree at Midwestern, he started a band at Notre Dame Catholic High School in Wichita Falls. After he graduated, his first job was at McLean, TX. From there he moved to Spearman, TX, and then to Guymon, OK, where he stayed for 9 years. His Guymon Band participated in the Rose Bowl Parade. He moved on to several locations in Oklahoma, including Enid, Stillwater, Coweta, Eufaula and McAlester. His bands attended the Festival of Roses in Seattle, Worlds of Fun contest in Kansas City, the Cotton Festival in Memphis, Six Flags Competition in Atlanta, and Disney World in Florida. Along the way, he also directed church choirs at Enid, McLean and Coweta. He was named Oklahoma Bandmaster of the Year in 1987 by Oklahoma Bandmasterâ??s Association. In 1990, he was inducted into the Oklahoma Bandmasters Hall of Fame.After he retired, Jerry couldnâ??t stay away from band activities. He was often called on to judge contests, and he enjoyed doing clinics and helping band directors to select that perfect piece for contest. His memory was incredible. He had a library of band music in his head. For several years he organized and hosted Musical Carousel contests every spring in Oklahoma City. They were attended by bands from Oklahoma, Arkansas, Missouri and Texas. His favorite part of the contests was the trophy presentation at Frontier City. He also worked at The Music Store for several years, and he traveled around Oklahoma to various band rooms to deliver repaired instruments and take orders for whatever the band director might need, and even on occasion took time to critique their band.Jerryâ??s favorite hobby was fishing. He loved farm ponds most of all and spent at least one day a week trying to catch â??the big oneâ?. He also enjoyed shooting pool and playing ping pong. He gave square dancing a try (where he met his wife) and even learned to be a square dance caller. He was a member of the Founders Chorus in Tulsa and sang bass in a quartet. His favorite vacation spot was Colorado â?¦â?¦â?¦where he did more fishing!Jerry is preceded in death by his parents and one sister, Elaine Steichman of Scottsdale, AZ. He is survived by his wife, Ilah, son Joey and wife Shannon of Tulsa, daughter Tracy Lanktree and husband Jeff, two grandchildren Abigail and Caleb Toler, stepson Corey Godfrey of Dallas, TX and nephew Mark Taylor and wife Val of Glendale, AZVisitation will be held from 6:00 â?? 8:00 pm on Wednesday, Jan. 2 at Floral Haven. A Memorial Service will be held at First United Methodist Church on Thursday, Jan. 3 at 1:00 pm.

Jerry Max Toler, 71, was born July 1, 1941, in Enid, OK, to Clarence Toler and Gladys (Rubick) Toler. He passed away peacefully with his family by his side on December 28, 2012. Jerry attended high school in Enid. He received a Bachelor of... View Obituary & Service Information

The family of Jerry Max Toler created this Life Tributes page to make it easy to share your memories.