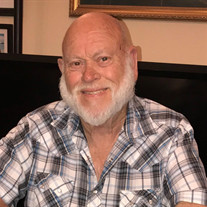 After a heck of a ride, Jess Lee Roy, 83, of Fort Smith, passed away swiftly on May 27, 2020 at his home. Born July 25, 1937 to Jess Thomas and Vivian Roy, Jess Lee had a long, hard and happy life. He was a man who joked and laughed easily. He grew up in Fort Smith running the streets, selling newspapers and shining shoes on Garrison Avenue. Surrounded by lots of family and friends growing up, he was a popular boy. He worked hard even as a child and gave his money to his parents to help raise the other kids. At 16, Jess Lee joined the Air Force and then went on to the Army, thinking he would make rank faster. He was a sheet metal repairman and had many stories of his time in service, and his 2 tours in Vietnam. While stationed in Germany, he met and married Annemarie. Jess Lee was good enough to take on his wife’s mother, Anne Therese, as a dependent at that time. Everyone in the military loved Jess Lee, and he had many good friends. Jess Lee was a real man’s man. Retiring after 20 years, making the E8 promotable list, Jess thoroughly enjoyed his service with the military. In 1976, he retired from the army and was able to spend time with his mother and siblings for many years. After his time in the service, he worked in various jobs and retired a 2nd time as security guard. Jess Lee lived with his wife for many years in Fort Smith and eventually moved to Tulsa to be closer to his son, Jess Thomas and his family. He loved to tinker and woodwork in his garage. The lucky ones got to enjoy his cooking throughout his life, which included breakfast, dinners, cakes, cookie and his famous grandpa sandwiches. He enjoyed many years with his grand kids living in Tulsa. He traveled to see his daughter Petra, and son Mark, in the Dallas area, his son Randy, in Fort Smith, and his daughter, Rhonda in Las Vegas. He enjoyed getting to know his grand kids there as well. In his older life he enjoyed watching western and action movies, working in his garage and relaxing with a smoke. He outlived all of childhood friends except his best friend Perry. The majority of his adult life was spent with his wife Annemarie by his side, through thick and thin. He was with her on the day he passed away and took care of her to the end. His parents, his brother Gene, and sisters Eula and Sue preceded Jess Lee in death. His wife, of 55 years, Annemarie; daughters Rhonda and Petra, sons Randy, Mark and Jess; 18 grandchildren and 1 great-grandchild, survives Jess Lee. Jess Lee wished to be cremated and have a military send off. Private Family Services will be held. ***FOR THOSE THAT CANNOT ATTEND THE SERVICE IN PERSON, PLEASE COPY AND PASTE THE FOLLOWING WEB ADDRESS IN YOUR BROWSER OR CLICK ON THE LINK: THE LIVE STREAM WILL START AT APPROXIMATELY 12:45 PM. IF YOU DO NOT SEE THE LIVE FEED, PLEASE REFRESH THE PAGE UNTIL IT APPEARS*** http://webcast.funeralvue.com/events/viewer/30282

The family of Jess Lee Roy created this Life Tributes page to make it easy to share your memories.

Send flowers to the Roy family.