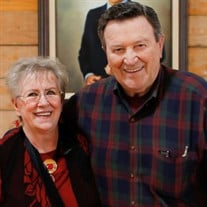 James Franklin Clark (Jim), 80, passed peacefully May 17, 2021 in Tulsa, Oklahoma. He was the loving husband to his bride of 56 years Phyllis June Decker Clark who passed peacefully May 25, 2021, just (8) days after Jim. Jim was born May 10, 1941 in Norman, Oklahoma, the 2nd of 5 children born to Harold and Beulah Clark. He graduated Moore High School, attended Cameron Jr. College and Central State University where Jim was the starting center for two National Championship Football Teams – Cameron in 1961 and Central State in 1962. Phyllis was born November 20, 1942 in Atoka, Oklahoma, the 3rd of 4 daughters born to Lonnie and Nola Decker. She graduated Central High School in 1959 with Honors at the age of 16, having skipped two grades due to high grades and academic testing. She immediately went to work as a private secretary in a law firm in OKC. Jim and Phyllis met the summer of 1964 and were married later that year. It was a whirlwind romance and their love for each other was unbreakable for 56 years. Jamie was born after their 7th wedding anniversary. To say Phyllis was a doting mom and Jim was a proud father would be an understatement. Phyllis was not only a devoted mother and wife but also a devoted daughter and sister. After tragically losing two older sisters in her teenage years Phyllis took care of her mother and father in their later years. Phyllis also became a second mother to her youngest sister Lonni. Their relationship was deeper and richer than just being sisters. Jim was drafted into the U.S. Army in 1966 where he was promoted to an E5 Sgt. After 18 weeks and served as a Drill Instructor in the Medical Corp. at Ft. Sam Houston. He loved to brag he was also won the Army Heavyweight Wrestling Championship in 1967! Phyllis attended bookkeeping school in San Antonio. The school required 3 prerequisite classes she had not taken but she still enrolled and finished the top of her class. Jim retired after working for 40 years in the retail auto industry, the last 30 as a dealer (Jim Clark Olds Cadillac & Honda, Muskogee, Clark Country Chevrolet Broken Arrow and Jim Clark Chevrolet in Yukon were three of his dealerships. He finished his career as a General Manager for the Fred Jones Organization. He loved the car business and worked hard at doing it right. Jim loved working with people both the customers and the employees. Phyllis worked with Jim at the Yukon Chevrolet store. She was always behind the scenes supporting Jim’s career and Jim often said Phyllis was the wind beneath his wings. She bowled in multiple leagues and she loved playing and hosting bridge parties. Phyllis was an avid reader and a dedicated learner with interest in many subjects she loved discussing with friend and family. She loved to travel and went all over the world with Jim. Jim was a 32nd Degree Mason and a member of the Myrtle Lodge in Oklahoma City and the Masonic Consistory in Tulsa. Jim was also a Shriner and a member of the Bedouin Shrine Temple in Muskogee. Jim had many hobbies over the years and fishing no doubt was his life-long favorite! Hunting, probably a close second. I don’t know any other man who has (4) largemouth bass “HOGS” all weighing in over 10 lbs. hanging on his office wall! Phyllis even accompanied Jim on a few hunting and fishing adventures over the years, fishing in Mexico, hunting in Colorado and an African Safari. In his later years Jim became quite entertaining sitting on his back patio overlooking a wilderness area, a bird feeding smorgasbord, binoculars and “Name that Bird” book in hand. Phyllis loved the holidays and decorated beautifully with her home looking like something from a magazine. Christmas in her home was special as every present was perfectly wrapped. She was the culinary genius behind Christmas and Thanksgiving meals. Every dish prepared with attention to every detail from the cranberry sauce to the turkey. Holidays always included in Peach Brandy fruit cake which was everyone’s favorite! Jim and Phyllis will be remembered for many, many things. Jim’s smile, sense of humor and ability to tell tall tales. They both like many from their generation, were willing to work hard and pursue dreams which was often contagious to the people around them over the course of careers and lives. Phyllis’s sense of humor was sharp too, had to be living with Jim! It is a difficult season in life to say goodbye to a father and mother in our case, but there is also joy…and amazement when you have so many friends, former employees and family offering not only their condolences but so many wanting to communicate what an impact Jim and Phyllis had upon their lives. Jim and Phyllis are survived by son Jack Clark & wife Wanda of Norman, OK, son Jamie Clark & fiancé Bonnie of Tulsa, OK, Phyllis’s sister Lonni St. John and husband Mark of Bixby, Jim’s brother’s Leland Clark and wife Imogene and Rick Clark and wife Carol. Jim was predeceased by his daughter Pamela Jean McGregor, his parents Harold and Beulah Clark, sister Anita Hill and brother David Clark. Phyllis was predeceased by her parents, Lonnie and Nola Decker, sister Eleanor Decker Knight, sister Virgie Decker Montano and nephew Glen Knight. Jim and Phyllis are also survived by (7) grandkids and their spouses; Joshua Clark & Candice; Justin Clark; Whitney Marerro & Jeremy, Akeilah Taff & Connor, Chris McGregor & Jenna, Clay McGregor & Lindsey, Heather Wensman & Logan. Finally, “Papa & Mimi” are survived by (20) great grandkids and multiple cousins, nieces and nephews. The memorial service will be held on Friday June 4th @ 3:00pm. Floral Heaven Cemetery Chapel 6500 S. 129th E. Avenue, Broken Arrow, OK 74012. Reception following in the Family Center. Celebration of Life Service will be 3:00 pm, Friday, June 4, 2021 at Floral Haven Funeral Home Chapel A reception will follow the service at Floral Haven Family Center. If you cannot attend the service in person webcasting will be available at the following link: https://webcast.funeralvue.com/events/viewer/54962/hash:992947251F602549

The family of Jim & Phyllis Clark created this Life Tributes page to make it easy to share your memories.

Send flowers to the Clark family.