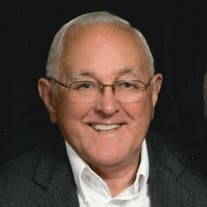 James “Jim” R. Wright of Tulsa, Oklahoma Loving Husband, Dad, Grandad and Great-Grandad passed into eternity Saturday, Dec. 04, 2021. Jim was born Jan.30, 1936 in Prairie Grove, Arkansas to Charles and Lucille Wright. In 1957, He met and fell head over heels in love with Marilyn Jauert in Luverne, Minnesota. After 2 years of courting, they tied the knot on August 2, 1959 and relocated to Tulsa, Ok. Soon after, Jim Joined the Teamsters union and was a local truck driver for many years. During this season of his life, he enjoyed riding motorcycles, fishing and vacationing at the lake with his family. He retired from truck driving in 1998 to spend time with Marilyn, his sons, and Grandchildren. He also found more time to fish. Although retired, Jim met with his Teamster brothers for a monthly breakfast at a local café on a regular basis. Throughout the many years of his life, Jim served his country in the United States Army and his church, Grace Lutheran as an usher and in many other roles. Jim lived life to the fullest… quick with a laugh, a smile, a sparkle in his eye and a story. He never met a stranger. He loved life and his family more than anything. Jim is survived by his wife Marilyn, Sons Jim and wife Trish Wright, Roger and wife Toni Wright. Grandchildren Kaci Wright, Kylie Nguyen and husband Dalten, Carissa Wright, Josh Payne, Jake Payne, Kiersten Winslow and husband Kody, Noelle Payne and Tabor Haws. Great- Grandchildren Kayne and Kastle. Brother Larry and wife Nancy Wright, and sister Charlene Gardner. He is preceded in death by his parents and brothers Gene and Gary.

The family of Jim Wright created this Life Tributes page to make it easy to share your memories.

Send flowers to the Wright family.