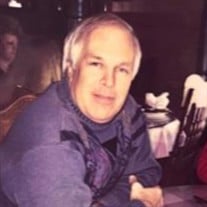 Jimmie “Jim” Lynn Russell, passed away at home on Saturday, June 19, 2021 after a long, battle with cancer. Funeral services will be held at Asbury United Methodist Chapel in Tulsa, OK on Monday, June 28, 2021 at 1:00pm. Jim is survived by his wife, Deborah (Wilson) Russell of 37 years, son, James N. Russell and wife Sarah of Tulsa, Stephanie Shupper and husband Steve of Tulsa, Dawn Zindler and husband Corey of Tulsa. “Papa” is also survived by his eight grandchildren, Andrew, Jackson, Brady, Ben, Zoe, Charlie, Finn and Tate, numerous nieces, nephews and in-laws. Jim is the son of Guss McBride Russell and Juanita Mae Cochran Russell of Chelsea, OK. He was born February 18, 1949, in Chelsea, OK. Graduated from Chelsea High School in 1967. Jim graduated from Northeastern State University Tahlequah, OK in 1971 with a degree Accounting. After college, Jim worked as a corporate buyer and then started his own successful company as a rep for the Oil and Gas industry and gas distribution supply company and had numerous lifetime friends in the energy business. Jim never met a stranger. Everyone who knew him, loved him. He enjoyed spending time with family and friends at their lake home on Grand Lake. Jim was part of the Grand Lake community for over 20 years. He also remained close to his many friends in the Chelsea community. He was very involved in several outdoor organizations which was the passion of his life. Jim was the Past-President of the local chapter of the National Wild Turkey Federation. He was a true outdoorsman. He was a hunter and fisherman, but his true love was spending time outdoors in nature. He was also very interested in his family’s genealogy and was very proud of his Cherokee heritage. To say that Jim loved his wife and large extended family is an understatement. He showed his love through his words and actions. If anyone needed him, he was there for them. He continually educated and entertained with his large catalog of “Jim-isms” and was known to tell great stories and jokes. He was preceded in death by his parents and his two sisters, Patsy Russell Haynes and Joanna Mae Russell. The family would like to thank the oncologists and staff at Oklahoma Cancer Specialist and Research Institute as well as MD Anderson – Houston. In lieu of flowers, please consider support the following organizations that were dear to Jim: St. Jude Children’s Research Hospital, MD Anderson Cancer Center, or your favorite local animal rescue.

The family of Jimmie Lynn Russell created this Life Tributes page to make it easy to share your memories.

Send flowers to the Russell family.