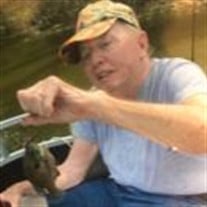 Jimmy Lee Staires, 82, resident of Broken Arrow, Oklahoma passed away October 6, 2021. Jimmy was born January 9, 1939 in Tulsa, Oklahoma to Harvey and Dorothy Staires. He will be missed by everyone who knew and loved him. Jimmy was preceded... View Obituary & Service Information

The family of Jimmy Lee Staires created this Life Tributes page to make it easy to share your memories.

Send flowers to the Staires family.