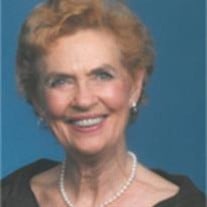 Jo Lea Setterholm age 85, passed away unexpectedly of natural causes on Tuesday, December 13, 2011 in Tulsa, Oklahoma. Jo Lea was born on April 8, 1926 to Harry Spencer Horton and Catharine (Tottie) Omega Darst Horton in Arkansas City, Kansas. As a beloved only child she grew up under Harry and Tottieâ??s wise guidance and was the joy and light of their lives. The Horton family moved to Tulsa when Jo Lea was in grade school. Her father traveled a great deal during her childhood and made sure to bring her a doll upon his return. Her doll collection was so extensive that two floor to ceiling enclosed cases were made to hold them. Her bright spirit and interest in others was a lifelong trait that made everyone who met her leave feel theyâ??d made a new friend. Her dearest girlfriends from grade school, Norma Brown Heeter and Betty Ann Bohart Wakefield remained close until her death. She graduated from Central High School in 1944 and went on to attend Linden College where she pledged Kappa Alpha Theta, a sorority she remained loyal to the rest of her life. She also attended Oklahoma A & M College in 1946. On June 5, 1946 she married Lt. Joseph Furbee Gordon at Trinity Episcopal Church in Tulsa. After his graduation from Oklahoma University they moved to Dallas, Texas where Joe practiced architecture. They had 4 children, Laura Lea, Joseph Spencer, Scott Darst & Clark Beatty. Through a series of fortuitous associations after the birth of twins, Scott & Clark, in 1956 the Gordon family was featured in a Life Magazine photo story entitled â??A Weekend Woe with a Father Named Joeâ?. In 1964 Jo Lea returned to Tulsa and continued raising her children. She loved entertaining and would prepare, often with her mother, wonderful meals for the many dinner parties held both in her home and in the home of her parents. She had great fun playing golf at the Tulsa Country Club and The Oak Country ClubÂ­ with her many friends. In 1988 Jo Lea married Vernon Miles Setterholm and entered into the second most meaningful marriage of her life. Jo Lea loved to travel. It was joked that she always had her bags packed and was ready to go on a momentâ??s notice. She had the good fortune to travel extensively all around this country as well as Europe. Dancing was another of her loves, and she took every opportunity to get on the dance floor with a partner. It was said of Jo Lea that she never met a stranger. No matter where she went she engaged people in conversation. Her interest, openness and innate ability to draw out stories and anecdotes from everyone with whom she came in contact was one of her most endearing qualities. She was preceded in death by her parents, Harry and Catharine Horton, and her husband, Vernon Setterholm. Jo Lea is survived by daughter Laura Lea Gordon, her sons, Spencer and his wife Hollie, Scott and his wife Debi, Clark and his wife Kathleen. Granddaughters include Jhanel Loretta Kies, Amber Lea and husband Ryan Pittman, Whitney Lynne Lemond, Logan Ann Gordon, Hayly Elizabeth Lemond, Sydney Raye Hansen, Shae Elizabeth Gordon and Catharine Rose Gordon. Grandsons include Kyle Beatty Gordon, Andrew Wayne Gordon and Cole Joseph Gordon, and great granddaughter Madeline Pittman. A Memorial Service will be held 10:00 a.m. on Monday, Dec. 19, 2011 at Floral Haven Funeral Home Chapel, 6500 S 129 E. Ave., Broken Arrow with a reception to follow at the Floral Haven Family Center. Jo Leaâ??s remains will be scattered at the family cabin along the Spavinaw Creek in foothills of the Ozarks. The family would like to thank the many friends and family who have given their loving support in this time of grief at Jo Leaâ??s sudden departure. We are comforted by their love and in the knowledge that she is set free to continue her travels.

The family of Jo Lea Setterholm created this Life Tributes page to make it easy to share your memories.