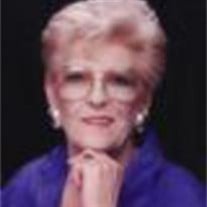 JoElla Herron, 83, passed away Wednesday, October 5, 2005, in Tulsa, OK. Born December 5, 1921, in Logan, NM to Claude C. and Hilda C. Oliver. Attended Trinity Episcopal Church. She was a loving and devoted daughter, sister, wife and mother, and was a woman of great class, dignity and beauty. She was affiliated with the Young Tulsans Band during the 1970’s and a graduate of Central High School, class of 1940. She was preceded in death by: her husband, Richard L. Herron; her parents; brothers, Jim Oliver and Ed Oliver; and sister, Deloris Sanzi-McGuire. Survived by: son, Richard J. Herron of Dallas, TX; daughter, Gloria Cormier and husband, George of Tulsa, OK; sister, Josephine Ford of Tulsa; and 3 grandchildren. Graveside service will be 1 p.m., Saturday, October 8, 2005, at Floral Haven Memorial Gardens. The family suggests donations to the Alzheimer’s Association in JoElla’s memory. Rest well, Mom, until we are all together again.

The family of JoElla Herron created this Life Tributes page to make it easy to share your memories.