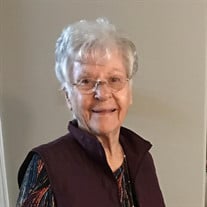 JoAnn Sartin passed away January 18, 2021, and resides now with our Heavenly Father. She was a model Christian wife, sister, aunt, mother, grandmother, great grandmother, and friend. JoAnn and her husband Bennitt were married for 64 years, and set the example to live focused on God and family. She was kind and gentle, coupled with that strong Oklahoma pioneer-woman spirit and work ethic. If there was something needing done, she would be there to help, regardless of the task. She was a fine southern cook and seamstress, making many of her own clothes and those of her daughters. Preparing large meals for family and friends was one of her specialties, and something she loved to do. She was also known for her sweet tooth, so cakes, pies, cookies, and candies, were a part of her cooking expertise. Immediate family survivors include: children and spouses: son-in-law Steve McDaniels of Tulsa, David and Carol Sartin of Jenks, and Sandra (Sartin) and Steve Smith of Franklin, Tennessee; grandchildren and spouses: Bradley McDaniels of Tulsa, Kelsey (McDaniels) and Victor Ornelas of Broken Arrow, Lindsay (Sartin) and Brandon Eichten of Frisco, Texas, Andrea Sartin of Dallas, Texas, Michael and Debra Sartin of Carrollton, Texas, Meredith (Smith) and Justin Hampton of Thompsons Station, Tennessee, and Brian and Candice Smith of Oak Ridge, Tennessee; great grandchildren: Grayson and Dylan Ornelas of Broken Arrow, Macy and Parker Eichten of Texas; Bennett and Lydia Hampton of Tennessee, and Jolene Smith of Tennessee. Preceded in death by husband Bennitt, daughter Linda McDaniels, sister Doris Candy, and parents Walter and Josephine Brockman. She was born in Edmond, Oklahoma on March 26, 1930, and grew up mostly in small town Porum, Oklahoma. In 1947 she graduated from Porum High School, and then attended Connors Junior College. Much of her life was devoted to raising and supporting family with husband Bennitt, as they were the family leaders for the next generations. JoAnn was active in a variety of Tulsa Baptist churches where she taught Sunday school, sang in the choir, and was involved in numerous women’s groups. She was most recently a member of South Tulsa Baptist Church. Although much of her life was devoted to church and family, she was also an avid golfer, reader, and traveler. She was very competitive, but always friendly, playing a variety of dominoes, card, and board games with family and friends. Contributions in lieu of flowers may be directed to the American Heart Association or American Cancer Society.

JoAnn Sartin passed away January 18, 2021, and resides now with our Heavenly Father. She was a model Christian wife, sister, aunt, mother, grandmother, great grandmother, and friend. JoAnn and her husband Bennitt were married for 64 years,... View Obituary & Service Information

The family of JoAnn Sartin created this Life Tributes page to make it easy to share your memories.

Send flowers to the Sartin family.