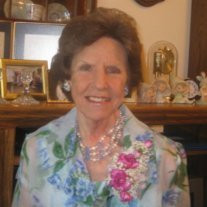 Jocelyn “Corrine” Cobble, 81, went home to her Lord and Savior September 19, 2013. Corrine was born in Otis, Kansas, October 23, 1931 to Joseph and Sarah Kaiser Schlegel. She was married Alvin “AJ” Cobble for 57 years. Corrine graduated from St Rose Nursing school, but turned down her first job to marry A.J. She worked for a short time as a private duty nurse, but her heart was being a career Wife & Mother. She taught us to love Jesus and love others. She spent many years as a Sunday School teacher. She also was a Cub Scout Den Mother & all four sons of her sons are Eagle Scouts. She has been an active member of Asbury United Methodist Church since 1975 where she was a member of the Seekers Sunday School class. She also served for a time as the President of the United Methodist Women. She so enjoyed working with the women of the church making crafts for their bazaars. She was a member of several study groups such as “Precepts” & “K” group, and the church-wide prayer chain. She was preceded in death by: her husband, A.J., her parents; one brother; Byron, one sister; Celia, nephew, Jeff and great- granddaughters, Abigayle Roberson and Savannah Martin. She is survived by: daughter, Debbie Roberson and husband, John of Sapulpa, OK; sons, Kevin and wife, Canming of Princeton,TX; Kim and wife, Danna of Moore; Kelly and wife, Tammie of Newcastle, OK; and Kyle and wife, Cathy Cobble of Saginaw, TX. God blessed her with 15 grandchildren: Jonathan, Sarah Martin & Aaron Roberson Paul, Pam, Rick, Chad, Adam, Cade, Ryan Erb, Caroline Stalsworth, Katie, Olivia, Andrew, & Amanda Cobble. 9 great- grandchildren: Emily, Libby, Jake, Ainsley Roberson, Madison, Drew & CJ Martin & Sam & Claire Cobble and one great-great granddaughter: Bailee Roberson 3 nieces and 1 nephew. Dawn, Beth, Tracy & JoelMemorial service will be held at 10 a.m. Tuesday, September 24th at Floral Haven Chapel, 6500 S 129th E Ave, Broken Arrow, OK. In lieu of flowers donations may be made to the Alzheimer’s Association.

The family of Jocelyn “Corrine” Cobble created this Life Tributes page to make it easy to share your memories.

Jocelyn “Corrine” Cobble, 81, went home to her Lord and Savior...