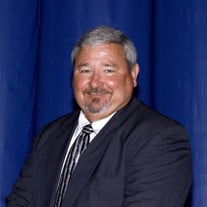 Joe Ralph Perkins Joe Perkins was a leader, a devoted family man and friend. His smile could light up any room and his laugh was absolutely contagious. Joe returned to his heavenly home on April 13, 2020. Joe Ralph Perkins was born on the 27th of July in 1951 in Perryton, Texas to Ralph and Lucille Perkins. He spent his early years on a farm in Forgan, Oklahoma with his brother, Kent. He attended Forgan schools and graduated in 1969. He enjoyed playing football, basketball, baseball, and track, but his main love was being a catcher for the baseball team. After high school, Joe attended Oklahoma State University and earned a degree in Business Administrations in 1973. He was an active member of the Phi Kappa Tau Fraternity. Upon graduation, he married Marinee Engel in 1973. Joe worked in restaurant management and taught at Dallas Christian College following graduation from OSU. Joe and Marinee moved to Tulsa in 1976 and he started the Police Academy that year. This would be his final career move and became a true calling to serve his community and police brothers and sisters. His son, Joe Ryan, was born in 1978, and would later proudly follow in his father’s footsteps as a Tulsa Police Officer. He married Lou Ann Cambern on November 27, 1981. His family then grew to include two more sons, Ryan and Travis Cambern. Joe spent his time supporting his boys at every football, baseball, and basketball game and theater performance. His devotion to the Tulsa Police Department and strong work ethic allowed him to quickly rise through the ranks and he was honored to become a Major for the TPD. He found great pride in his role as a police officer and excelled in many areas of this position, such as becoming a member of the special operations team and serving as a sniper. He was an active member of the local, state, and national Fraternal Order of Police organizations throughout his life. Joe was the Local Lodge President in 1992 and he was elected and served as the Oklahoma National Trustee for 19 years. Fourteen of those years, Joe Perkins was the National Chairman of the Board of Trustees for the FOP. It was through this elected position that he traveled extensively across the United States and made many life-long friends. He met many US Presidents, Vice-Presidents, and Attorneys General as he served on this board and attended the annual Police Memorial Service each year in Washington DC. Joe served on the National FOP Legal Defense Board which provides attorneys to defend officers' on duty actions. He was appointed by Governor Brad Henry to the Oklahoma Able Commision and served from 2003 through 2009. He was also a member of the Oklahoma Pension Board for Police Officers. He served on the Board of Directors and was Chairman of the Board for the Fraternal Order of Police Credit Union for many years. Joe served on an advisory board to President Donald Trump. Following retirement in 2008, Joe found great happiness enjoying his hobbies; hunting, fishing, competition bar-b-que, and nascar. He served as the competition tournament coordinator for the Tulsa Police Bass Club. He was a pivotal member of the Thin Blue Line bar-b-que team by contributing not only his meat smoking expertise but also his famous Papa Joe’s bar-b-que sauce. On any given day, he could be found at Grand Lake working on his fishing poles, smoking ribs, watching nascar, snuggling a grandkid or two in his lazyboy or visiting with his buddies with a trusty dog by his side enjoying life. Joe is survived by his loving wife, Lou Ann Perkins, of Owasso, Oklahoma; his three sons, Ryan Cambern and wife, Leigh-Ann, of Celina, Texas, Travis Cambern and wife, Erin, of Bixby, Oklahoma, and Joe Ryan Perkins and wife, LaTisha, of Tulsa, Oklahoma; his brother, Kent Perkins and wife, Cindy; his sister-in-law, Shelley Cooper and husband, Roy; his five grandchildren, Caroline, Lily, Harper, Hudson, and Addison; and his nieces and nephews. Services to celebrate the life of Joe Perkins will be held Monday, August 3rd at 2:00pm at Asbury United Methodist Church. In lieu of flowers, donations are being accepted for the Tulsa Fraternal Order of Police Benevolence Fund at https://tulsacf.org/?fund=255 to help support Tulsa Police Officers and their families in times of need

Joe Ralph Perkins Joe Perkins was a leader, a devoted family man and friend. His smile could light up any room and his laugh was absolutely contagious. Joe returned to his heavenly home on April 13, 2020. Joe Ralph Perkins was born on the... View Obituary & Service Information

The family of Joe R. Perkins created this Life Tributes page to make it easy to share your memories.

Joe Perkins was a leader, a devoted family...

Send flowers to the Perkins family.