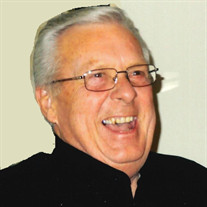 Joe Allen Schad, 77, resident of Broken Arrow, Oklahoma passed away, September 14, 2021 surrounded by family after struggling with health issues for decades. Joe was born May 3, 1944 in Effingham, Illinois to Virgil Leonard Schad and Lela Hazel Arrington (Johns). Joe graduated from Central High School in Tulsa, Oklahoma. Joe had a very strong work ethic; he started working at a young age at Warehouse Market and TG&Y. Joe would meet and marry the love of his life, Elizabeth Ann Schad (Keith) and the couple moved to Texas to work in construction with his stepdad. The couple moved back after a short while and his wife’s uncle got him a job at Byron Jackson Pump which later became Ruhrpumpen. Joe worked his way from entry level to management positions and stayed there for 34 years. When Joe wasn't working he led a very active life. His hobbies included bowling with his wife when the kids were little. He played in church softball leagues and recreational soccer leagues in his 30s and 40s and eventually he moved on to his favorite...Golf!! Joe enjoyed playing Chicken Foot with family and close friends; going on yearly Branson trips and day adventures around Oklahoma with dear friends. The most important thing to Joe was his family and he especially loved attending and cheering on grandchildren at soccer, football and basketball games. Joe will be dearly missed by everyone who knew and loved him. Joe was preceded in death by his father, Virgil Leonard Schad and his mother, Lela Hazel Arrington (Johns). Joe is survived by his beloved wife of 54 years, Elizabeth "Liz" Ann Schad; his daughter, Angela Brashears of Broken Arrow, OK; daughter, Alisha Day of Broken Arrow, OK; son, Jason Schad and his wife, Stephanie of Broken Arrow, OK; grandchildren, Alyssa Brashears, Alexis Brashears, Jacob Schad, Ainsley Schad, Ashlyn Day, Joseph Day, Abagayle Day and numerous other family members and friends. Graveside Service will be 1:00 PM, Tuesday, September 21, 2021 at Floral Haven Garden of Gethsemane. Celebration of Life Service will follow the graveside at 2:00 PM, September 21, 2021 at Asbury United Methodist Church.

The family of Joe Allen Schad created this Life Tributes page to make it easy to share your memories.

Send flowers to the Schad family.