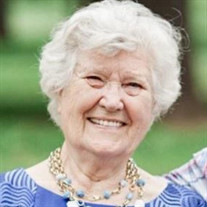 Johanna was born on 27 September 1928, the fourth of fourteen children of Fokke Beswerda and Wilhelmina (Heemskerk) Beswerda in Delft, the Netherlands. She died surrounded by her family on 8 January, the same day that 33 years ago was one her happiest with the birth of her first grandchild. She met Cornelis (Case) Boshuizen at her parents’ 25th wedding anniversary celebration. Parties and practical jokes were always a must at the Beswerda house. Case and Johanna were engaged on 1 January 1952, the day before Case had to begin his army service. They were married on 8 June 1955 by Ds van Strien who later baptized their oldest daughter, Marianne, in 1956. Later in 1956, they emigrated to Tulsa, Oklahoma, sponsored by the Brotherhood Class of First Presbyterian Church. Sons Robert and Eric and twin daughters, Roselinda and Yolanda, were born in Tulsa. Except for sojourns in the Netherlands and Belgium, they lived in Tulsa their whole lives. Johanna was an elder of the Dutch Reformed Church of Brussels. She took the job very seriously, spending hours in meetings, visiting members at home, coming home with a priest’s religious jokes after ecumenical meetings, and buying most of the raffle tickets for a fund raiser for a protestant home for the aged. After moving back to Tulsa in 1974, Johanna delivered Meals on Wheels for decades, supported her husband and children in any way she could, worked in a mothers day out where toddlers learned to speak English with a Dutch accent. She loved her Mariners class, her Presbyterian Women’s Circles and Monday School. She was a life long learner. When the grandchildren came along she went all in supporting them in their endeavors. Johanna and Case traveled often to the Netherlands to spend time with extended family, to the Occitan area of France, and their favorite Colorado spot, Winter Park. She is survived by her husband Cornelis, children Marianne (Gary), Robert (Sophie), Eric (Judy), Roselinda (Clay), Yolanda (Gerhard), beloved grandchildren Vanessa, Veronica, Nelson and Ethan, sisters, Anke (Kees) and Lineke and brother Wim (Rina), and by a large extended family in the US and in Europe. Thanks to Trinity Woods Holliman and Health Center nursing staff who loved and cared for her as if she were their own mom and Oma. Thanks also to the St Francis hospice nurse for giving Case and Johanna a personal Dutch connection. Honor Johanna with donations to Meals on Wheels or Presbyterian Women. Visitation will be held on Wednesday, January 12 from 4 pm - 6 pm at Floral Haven Funeral Home. A Memorial Service is scheduled for Friday, 14 January, 3:00 pm, in the sanctuary of First Presbyterian Church, Tulsa. There will be a reception after in Stephenson Hall- 709 S Boston Ave, Tulsa, OK 74119 For those unable to attend, follow the link for webcasting services: https://livestream.com/firstchurchtulsa/events/10077473

Johanna was born on 27 September 1928, the fourth of fourteen children of Fokke Beswerda and Wilhelmina (Heemskerk) Beswerda in Delft, the Netherlands. She died surrounded by her family on 8 January, the same day that 33 years ago was one her... View Obituary & Service Information

The family of Johanna Boshuizen created this Life Tributes page to make it easy to share your memories.

Send flowers to the Boshuizen family.