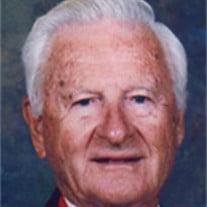 John Craig Cartmill, 91, passed away peacefully in his sleep on October 4th, 2012. A retired Petroleum Geologist & Log Analyst, he was born on August 25, 1921 to Elizabeth & John R. Cartmill in Tulsa,Â OK. He attended Lee and Horace Mann schools, and graduated from TulsaCentral high School in 1939.Flying was his first love.Â He was one of the first to graduate from the Army Air Corps Combat Flying School in Lubbock TX in 1942 and served in World War II as a Glider Pilot. Continuing his love for aviation as a member of the Tulsa Skyhawks for many years, he had a particular love for soaring and spent many delightful hours under the cumulus clouds of Oklahoma.Â He received a masters degree from Tulsa University in 1968 in Petroleum Geology, and was one of the founders of theÂ Tulsa Log Library. He was employed by Gulf Oil, Champlain Refining, Anchor Petroleum, U.S.G.S., and retired from Reading & Bates Petroleum Company, as a Log Analyst. He continued to impart his wisdom and creative ideas to the very end. He was a member of AAPG, SPE, Society of Professional Well Log Analysts, Inc. and the Soaring Society of America. Â He is survived by his wife,Â Earleen (Kim) Cartmill, of the home, his daughter Deidre Cartmill of Broken Arrow, OK and his step-daughter Jamie Sullivan Fitzgerald and herÂ husband RoyÂ of Albuquerque, New Mexico. Â He was preceded in death by his first wife, Roberta Cartmill of Tulsa, his step-son Timothy Sullivan of Tulsa, and his brother Robert Cartmill of Slidell, LA. He left 5 grandchildren and several nieces and nephews who were a great joy to him. He was a respected and loved by all who knew him.Â He will be greatly missed. Â A celebration of his life will be held at 2:00pm, Monday, October 8th 2012 at Cedar Ridge Christian Church in Broken Arrow, OK, followed by a reception at Floral Haven Funeral Home.Â A viewing will be held from 2:00 PM to 4:00 PM on Sunday at Floral Haven.

The family of John Craig Cartmill created this Life Tributes page to make it easy to share your memories.

John Craig Cartmill, 91, passed away peacefully in his sleep...