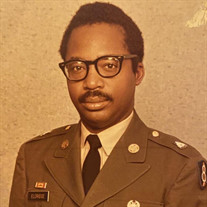 JOHN CHARLES ELDRIDGE SUNRISE 08/02/1949 SUNSET 04/02/2021 Who was this man named John Eldridge that we celebrate today? Let’s start from the beginning. John was #4 of 8 children from William Jean Eldridge and Margaret Ruth Eldridge, born on August 2, 1949, in Lenoir, TN. They moved to Chicago, IL where he met and later married Patricia Hall in High School. They were married for 51 years and have 2 daughters, Zerenda and Vanessa; 5 grandchildren, DJ, Jonathan, Shantell, Kayla, and Jordan; and 2 great-grandchildren, Aurelia and Maxwell. He had many adventures and travels in the Army for 20 years and then went back to school to become an airplane mechanic for American Airlines for 21 years. A hardworking, hard-headed and handyman was he. He was a family man and prided himself in being there for his immediate, extended, and adopted family and friends. Always willing to lend a hand when needed. What more can be said other than his giving and kind spirit will be missed, but never forgotten. Who was this man named John Eldridge, he is my daddy, a loving husband and father to many that lovingly called him “Pops”. He is survived by his wife, daughters, 5 grandchildren, 2 great-grandchildren, 2 sisters Joyce Sparkman and Sandra Seaton, several nieces, nephews, cousins, and friends. No more pain, no more sorrow, finally at peace. You will be missed but never forgotten. Webcasting of the service is available at the following link: https://webcast.funeralvue.com/events/viewer/52187/hash:395405179A7DE036

The family of John Charles Eldridge created this Life Tributes page to make it easy to share your memories.

Send flowers to the Eldridge family.