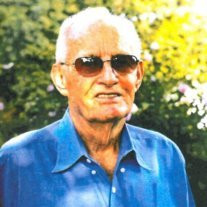 John William Franklin was born February 19, 1927, in Van Buren, Arkansas to James William and Doshia May (Flanagan) Franklin. He was the youngest of five (5) children. At the time of his birth Opal Vinitia was 14, James Preston was 12, Edna Ray was 10, and Harry McKinley was 4. Their father was a former Van Buren Fire Chief, had a small sawmill and crafted wooden caskets locally. In John’s early teens accompanied by his father, mother and Harry made four (4) trips to California and back performing migrant work, picking figs, avocadoes and cotton. But it was in Susanville, cutting timber with a crosscut hand saw, that John learned the meaning of hard work and a respect for what it afforded. By then, Sister Opal and Brother Preston had moved their families to the Bakersfield, Susanville area In 1944, WW II under way, Harry was already in combat when the Army drafted, trained and shipped John to Japan. On the trip over, Japan surrendered and John completed his service in occupied Japan. He was discharged December 11, 1946. He returned to Arkansas for a short time and then came to Tulsa where he and Brother Harry worked a trash route before starting an auto repair shop. Harry did the automotive work while John covered the body repair. It was during this period that John met Rosie and she quickly stole him from his girlfriend. On December 22, 1949, after dating nearly a year they were married. They rented a house and later moved to their new GI loan home on Zion St. north of Dawson, next to Harry and Genevieve. After a few years the kids came, Mike was born in ’53, Pat in ’55, Brenda in ’57 and Mary in ’59. After out growing their house on Zion they moved to 2.5 acres at 1328 N. Garnett Rd, Tulsa where the kids were raised. John had a keen sense of the importance of family. He also learned the importance of money, how to make it and make it work for them. He was determined his family would know a better life than he had known. He wasn’t extravagant but liked his toys; a shiny dependable car, guns for hunting, a nice boat and house. Things he shared with his family, friends and their enjoyment of life. John instilled many things in those around him, his love of family, of life, respect for nice things and of equal importance how to keep them nice. Example – the boat never went in or came out of the water until it was washed, inside and out. He loved the lake, fishing, and boating with his family. So much so, when his brother-in-law JD Blum excavated Craig’s Cove on Lake Hudson, North of Salina and received a lot as a partial payment. John put a trailer on the lot for their families shared until the lots across the cove and their docks were finished. This completed the retreats their families would cherish for the next 20 years. The kids remember “at 5:30 pm Friday, when Daddy got home from the shop, we had better have the car loaded and be ready to leave for the lake or there was hell to pay.” Everyone worked and played hard; enjoying the weekends until dark Sunday evening the driving to Tulsa to start it all over again. Harry and Genevieve set up a place at the Cove and our three (3) families made many happy memories. Ever industrious, resourceful and determined John rented a building near Tulsa’s 3rd St. viaduct and opened a body shop. Several years later he bought the lot at 1730 E. 6 St., built a building and started Franklin’s Body Shop, which he operated until 1976. He later worked ten years as a Farm Bureau Insurance Adjuster to create a pension and complete a new prefab home on Craig’s Cove to relax and retire at on the lake. John and Rosie, both disciples of hard work, constantly had work projects. If the kids needed help; moving, working in the yard, painting the house, or putting on a family gathering, they were the first ones to show. They were involved parents, grandparents and great grandparents. They helped raise our families and each of our kids. “Not out of necessity but by choice.” He made each of us feel special and it meant the world to us.On October 9, 2013, at 4:47 pm, his work completed, John passed peacefully, surrounded by his family’s loving care. John leaves behind his Wife Rosie, children Mike Franklin, Pat Franklin, Brenda and T. Dick Cagle, Mary and Roy T. Best, seven (7) grandchildren, five (5) great grandchildren, Sister Opal Lovett, Brother Harry Franklin and a host of other relatives and friends. He was a proud man, rich in common sense, work ethic and responsibility. This good, ornery, beautiful man who lived his earthly rewards, now rest with his Lord in Heaven.

John William Franklin was born February 19, 1927, in Van Buren, Arkansas to James William and Doshia May (Flanagan) Franklin. He was the youngest of five (5) children. At the time of his birth Opal Vinitia was 14, James Preston was 12, Edna... View Obituary & Service Information

The family of John William Franklin created this Life Tributes page to make it easy to share your memories.