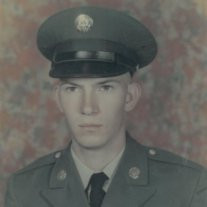 John Walter Smith III, 8-27-1946, was born to two loving parents John Walter Smith II, 12-27-1906, and Jenny Elizabeth Smith, 2-12-1908, and one sister who all proceeded him to Christâ??s Kingdom. John Walter Smith III was known by his love oneâ??s and close friends as Jay-Dah-Bu or Jay double u or just Jaydub. John graduated Central High School in Tulsa, Ok in 1964. He furthered his education he attended Oklahoma State University in Stillwater, Ok from 1964-1966. The courses he studied were subjects of Engineering and Business. He attended United State Army Quarter Master School in Fort Lee, Virginia. In 1970, John attended Okmulgee tech course and graduated from Automotive Air Conditioning. John entered the United States Army in 1966. He was honorably discharged in 1972. John W. Smith III held several positions with companies in Tulsa, Ok from 1973 to 1982 John W. Smith III owned and operated his company called TinCo Automotive. He was employed with many other positions in companies such as Malchi Automotive Supply, 1969-1971, Mack Truck sales, 1971-1973, Polo Seating Co., 1982-1984, The Carriage House, 1984-1985, Bear Auto Service Equipment Co., 1985-1986. John was blessed to have been married twice both ended in divorce with no children from either marriage. John W. Smith III helped people, children, and animals. He loved cats and dogs. There are no words to express the Joy that his animals gave J.W. He also had wonderful friends that loved him over a space of more than 40 years. Jim and Karen Myers loved J.W., Robert and Susy Hamber met Mr. Smith in 2007 and John embraced us as family from that day forward. To you, John W. Smith III, although you are gone from this place in time, you will not be forgotten; we salute you John Walter Smith III. To you, J.W. may you reach for the moon and may not touch the moon at least you will be amongst the stars.

The family of John Walter Smith III created this Life Tributes page to make it easy to share your memories.