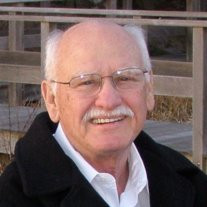 John David Walker, 75, of Tulsa, died August 27, 2013. He was born March 18, 1938 in Talihina, Oklahoma, the son of Mignon “M.C.” and Viola Walker. He honorably served his country in the United States Army. John worked as a CPA, owning his own business for many years. He is survived by his son, John Michael Walker, and daughter-in-law, Denise, of Tulsa, Oklahoma, daughters, Joni Walker, of Tulsa, Oklahoma, and Lori Fuller, of Owasso, grandchildren, Jessica Walker, Casey Freeman, and Michael Carr, two brothers, Blake Walker and Tom Walker, and numerous other family members and friends. He was preceded in death by his parents and brother, James Walker.

The family of John David Walker created this Life Tributes page to make it easy to share your memories.