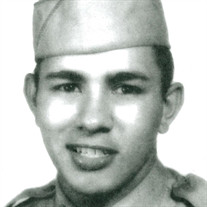 Joseph “Arnold” Cordova of Tulsa, Oklahoma, died peacefully at home with his caring and loving family members with him on January 22, 2021. Arnold attended school in Sand Springs, Oklahoma and after graduating from high school he entered the U.S Army where he served for three years. After attending Technical College, he began his working career which eventually led him to Rockwell when it came to Tulsa. As a structural design engineer he had the opportunity to work on the startup of the Apollo Space Program. He was at Cape Canaveral for one of the Apollo Space launches which he said was a sight to see and the memory of the launch remained special to him all his life. He retired from Rockwell after 30 years and enjoyed spending time doing one of his favorite pass times playing not only duplicate bridge but regional tournaments too. Arnold had a beautiful singing voice and our home was filled with his songs which could be heard outside the house if someone was nearby. He also sang in the St Peter & Paul church choir where his voice stood out from the rest. He also had love of football, particularly the Oklahoma Sooners, which was his favorite team. That soon became the family favorite as well. Arnold is survived by this loving wife of sixty-five years Carmelita Cordova, and their five children; his three sons Michael (Romy), Joseph ‘Tony’ (Leigh), and David. Their two daughters Stacy (Jay) and Debra. His grandchildren Nathan, Nichole, Braden (Jessica), Ian, Christy; as well as great grandchildren Mollie, Carmelita, and Bentley, and one great-great grandchild Mia. His brother Abel (Rita), and sister Frances. He was proceeded in death by his parents William and Estella Cordova; his three sisters Hope, Lucy, Alice, and one brother Arthur. Graveside Service will be 11:00 am, Wednesday, March 3, 2021 at Floral Haven Memorial Gardens.

Joseph &#8220;Arnold&#8221; Cordova of Tulsa, Oklahoma, died peacefully at home with his caring and loving family members with him on January 22, 2021. Arnold attended school in Sand Springs, Oklahoma and after graduating from high school he... View Obituary & Service Information

The family of Joseph Arnold Cordova created this Life Tributes page to make it easy to share your memories.

Send flowers to the Cordova family.