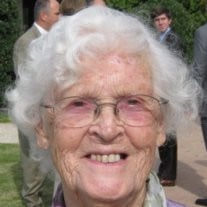 Our beloved mother,Joyce Margaret Wilderman born on June 18, 1917 in England. To Leonard Charles Hawkins and Margaret Stevens Hawkins. Served in the Womenâ??s Auxiliary Air Force in England during WWII. In 1944 she married Master Sergeant, Joe L. Wilderman of the USAF. Married Joe Wilderman June 17th 1944 in Thames Ditton, England. Came to the United States after the war ended. She lived in several places in Oklahoma and Kansas during that time. Returned to England in 1951 where Joe retired. Returned to the US in 1957 living in several towns in Kansas and Missouri. Moved to Broken Arrow Ok in 1961. Became a citizen of the US in 1983. She was a founding member of St. Andresw Episcopal Church, Broken Arrow for which she received an award in 2012 for being the oldest living member at their reunion celebration. She also painted all of their stained glass windows. She attended bible study at Church of the Holy Spirit every Thursday with her daughter Jane. She was a homemaker most of her life but worked for 20 years at Shangri-La Kennel for Dr. Gerta Kennedy where she was able to make friends with many in the Broken Arrow community. Joyce had many hobbies which included painting, knitting, ceramics, quilt making,sewing,stamp and rock collecting. She loved making jig saw puzzles, working crosswords and playing solitaire and Train Dominos. She was also an avid reader preferring English regency novels. She loved bird watching and spent countless hours on her back porch drinking tea and enjoying the birdss and flowers.. SHe loved nature and for may years spent weekends at Lake Hudson where she had a resort home. She spent her summers in England and traveled extensively in Europe during that time. Recognition should go to Margie Hair for spending many meaningful hours with her during the last few months. She enjoyed traveling going almost every year to England with trips to other places in Europe. When she was in England she attended St Barnabas Church in Ealing. She made friends wherever she went. She was at the BA Senior Center for Bible study every Monday. She spent Wednesdays at the BA Beauty College where the students had a special place in her heart. Her friend Phyllis was her wheels and frequent companion for the last 5 years. Joyce never hesitated to go out to visit or spend time with friends. Preceded in death by her parents, husband and 2 brothers Brian Hawkins and John Hawkins. Survived by daughters Margaret Friday, London, Charlotte Roberts, Broken Arrow, Mary Stevenson and son in law, Leon Broken Arrow. Jane Monteiro and soni in law Mark Tulsa. 9 grandchildren Charis Wakelin, Harpenden, UK. Melanie Roberts, Broken Arrow, Michael Hoelscher, Broken Arrow, Alicia Wadell, Broken Arrow, Heather Cacaperdo, Tulsa, Robert Myers and wife Jennie, Montana, Charis Wakelin and husband Jonathan UK, Timothy Myers Henderson NV, Christopher Myers and wife Janelle, CA, Heather Cacoperdo and husband Mario,Tulsa, Adrianne Longsinger and husband Jacob Edmond, OK. 10 great grandchildren. In lieu of flowers donations may be made to Salvation Army, John 3:16. She passed away very peacefully on 02-07-2013. The best things in life are the people we love, the places we’ve been, and the memories we’ve made along the way.

The family of Joyce M Wilderman created this Life Tributes page to make it easy to share your memories.