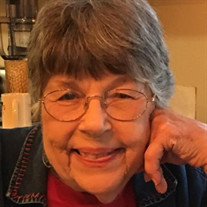 Judy Kay (Resler) Hefley September 14, 1940-May 8, 2021 Judy was born September 14, 1940 in Cherokee, Oklahoma. She was the daughter of Henry E. and Margaret G. Resler. She attended Cherokee Public Schools, graduating in 1958 as the valedictorian of her class. After working in drug stores in Cherokee, she moved to Tulsa in early 1961 to become an office administrator for Getman Drugs. In early March of 1962, she met Carl Hefley and they were married in September of that year. Their only child, Janice Kay, was born in April of 1963. In July of 1965, the family was transferred to Houston, Texas but returned to Tulsa in early 1966. In late 1968 the family was transferred to Blackwell, Oklahoma. In the fall of 1969 Judy entered into Blackwell General Hospital’s school of licensed Practical Nursing, graduating the next fall. After working for a year as an LPN at the hospital, she enrolled at Northern Oklahoma College in Tonkawa, Oklahoma in their Registered Nurse program. She graduated in 1973 with an Associate degree in Applied Science with Magna Cum Laude honors and in the top 3% of all RN degrees graduated in the United States. After working for doctors in Blackwell and Ponca City, she entered into legal work in the Kay County Court House in Newkirk and then in Blackwell. In November of 1984, the family was transferred back to the Tulsa area, settling into their current home in Jenks. After first working for a doctor in Tulsa, she then joined the legal department of Mortgage Clearing Corporation until her retirement. In 1996, she decided to retire from the workforce to become a fulltime family caregiver to her two grandchildren, Sarah and Jack Wingfield. Judy has always been a devout and faithful member of the Lutheran Church-Missouri Synod. The family are members of Trinity Lutheran Church in Broken Arrow. Early in her adult life, she became a Sunday School teacher for children. She has taught Sunday School for more than fifty years in Lutheran churches in Tulsa, Blackwell, and Broken Arrow. Judy is survived by her husband Carl of more than 58 years; one daughter, Janice Kay and husband Don Wingfield of Jenks; one granddaughter, Sarah, and husband Dylan LeFevre of Broken Arrow and their children Isaac, Naomi, and Nora; one grandson, Jack Wingfield of Jenks and his son, James; one brother, Bobby Resler of Paragould, AR; one niece, Lynnae and husband Jake Kellett of Paragould, AR and their daughters Sabrina and Alexanne; one nephew, Jeremy Resler of Perry, OK and his three children Dominick, Abigail, and Jonathan. Donations can be made to Trinity Lutheran Church in Broken Arrow, a hospice of your choice, or to your favorite charity in her honor.

Judy Kay (Resler) Hefley September 14, 1940-May 8, 2021 Judy was born September 14, 1940 in Cherokee, Oklahoma. She was the daughter of Henry E. and Margaret G. Resler. She attended Cherokee Public Schools, graduating in 1958 as the valedictorian... View Obituary & Service Information

The family of Judy Kay Hefley created this Life Tributes page to make it easy to share your memories.

Send flowers to the Hefley family.