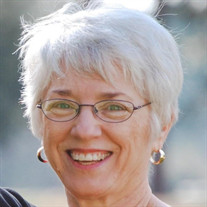 Julia “Julie” Ann (Tate) Galvez passed away peacefully, with her loving family by her side, on 29 November 2021 due to complications from Alzheimer’s. Julie was born in Ardmore, Oklahoma on 22 November 1942 and raised in Carmi, Illinois. After graduating from Carmi High School in 1960, she attended the University of Tulsa where she majored in Education, minored in Languages and graduated with honors in 1970. While attending TU, Julie met the love of her life, Carlos. They were married on 18 August 1962 and have four wonderful children. Julie’s life reads like a real-life fairy-tale book packed full of love and adventures. Upon graduation, Julie taught at Tulsa Public Schools where her love for education and kind heart left a lasting impression on her students. However, her teaching career was interrupted when Carlos, Julie and their two oldest children, Michele and Carlos Jr, had an opportunity to move to Alaska to be a part of the construction of the Trans Alaska pipeline beginning in 1974. While in Alaska, Julie worked for Arctic Constructors in the payroll and accounting department where she was responsible for hopping in a helicopter for the weekly payroll distribution for six pipeline construction camps north of the Brooks Mountain range. She worked full time, often twelve hours each day. She became accomplished in cross country skiing and often packed up the family on weekends to explore all that Alaska had to offer! After adventures in Alaska, and the birth of their younger daughter, Elena, the family had an opportunity to move to Tehran, Iran in 1977. While in Tehran, Julie became active in the American Women’s Club of Iran, learned quite a bit of Farsi and absorbed the Persian culture. Carlos and Julie also welcomed their younger son, Tony. Shortly after Tony’s arrival, the family had to leave Iran on very short notice due to the unstable political environment there in early 1978. After returning to Tulsa in 1978, Julie became quite active in the Embroiders Guild of Oklahoma (EGO) and held several positions within EGO including Treasurer and President. After their children were grown, Julie and Carlos lived in Nigeria for Carlos’ work. Julie immersed herself in the Expatriate community there, organizing and executing many charitable projects such as books for schools and clothing for less fortunate families. Julie also developed a love for native Nigerian fabrics and beads. Continuing their adventures, Julie and Carlos accepted a job assignment to Santa Cruz, Bolivia. Julie immersed herself in the local culture, became proficient in Spanish and quickly became involved with an organization working with local orphanages. After their assignment ended in Bolivia in 2005, Carlos and Julie returned to the U.S. where they retired and established their residence in Broken Arrow, Oklahoma. They enjoyed all their time together, whether it was in Broken Arrow or on any of their extensive travels. Julie became an accomplished needle pointer and embroidered many works of art for family and friends. She was a parishioner of St. Benedict’s Catholic Church, active again in EGO, Forest Creek Women’s Club and many other social groups. Julie had a love for many things, including other cultures, languages, and arts, but most of all she had an amazing love for people. Her passion for life and kind and welcoming heart were unmatched. The nearly 60 years of marriage that Carlos and Julie shared is the epitome of love and devotion. And as a mother, Julie’s patience and grace left her family and anyone that knew her in awe. She adored her grandchildren and grand-dogs and always made sure everyone that walked through their door felt welcome and loved. She was truly an angel on this Earth. While we have a hole in our hearts, Julie’s adventurous and kind spirit will stay with us always. Julie is survived by her husband of 59 years, Carlos, her four children- Michele Dan (Holly Lake Ranch, Texas), Carlos Jr and Beth Galvez (San Diego, California), Elena and Bart Essick (St. Louis, Missouri), and Tony and Emily Galvez (Jenks, Oklahoma), siblings Pam Newcomb (Indiana), Don Tate (Texas City, Texas) and Rob Tate and Chris Ludlum (Indiana). She was blessed with nine grandchildren, Caleb, Chris, Michael, Robert, Maria, Haylee, Kolton, Hendrix, and Lennon. The family is deeply grateful to Porta Caeli Hospice House who brought comfort and care to Julie and her family in her final days. In lieu of flowers, the family would appreciate any donations to Porta Caeli Hospice House in Tulsa, Oklahoma, Donate Online | (portacaeli.org). Visitation for Julie will be held 4:00 PM - 6:00 PM, Thursday, December 02, 2021, at the Floral Haven Rose Chapel in Broken Arrow, Oklahoma. A service will be held 11:00 AM, Friday, December 03, 2021, at the Floral Haven Rose Chapel in Broken Arrow, Oklahoma. Julie's funeral service can be watched via https://webcast.funeralvue.com/events/viewer/64585/hash:8AE085ED4062523F

The family of Julie Galvez created this Life Tributes page to make it easy to share your memories.

Send flowers to the Galvez family.