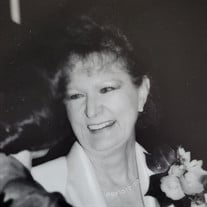 Karol Jean (Welsh) Hall passed away on March 8, 2021 in Sun City West, Arizona at age 87. Born in Tulsa, Oklahoma to Harry E. Welsh and Marie A. (Taylor) Welsh, Karol attended Tulsa’s Emerson Elementary School and Roosevelt Junior High before graduating from Central High School in 1952. She studied Business Administration at University of Tulsa (1952-54) where she was an active member of Kappa Kappa Gamma Sorority and Secretary of her Freshman Class. In October 1954, Karol married Lt. Phillips C. Hall, a Petroleum Engineer and officer in the USAF. Soon thereafter, she relocated to London, England where Lt. Hall was stationed at S. Ruislip AFB. This proved to be the first of many moves to various locations around the world including Benghazi and Tripoli Libya, Houston Texas, Sydney Australia, Hartford Connecticut, and the retirement move to Arizona. While living overseas, Karol travelled extensively with her family throughout Europe, Asia, and the South Pacific. Karol was a valued member of various work teams including at Home Federal in Tulsa during her time at TU, as a Colonel’s secretary in the Strategic Air Command in England, as an executive assistant for Lufkin Industries in London and as a realtor for Century 21 in Houston. Her dedication to family meant Karol’s natural beauty, talents and gifts as a model, artist, dancer, fashion designer/curator, caterer, interior decorator, historian, and healthcare provider, were never applied professionally, although they very easily, and profitably, could have been. She freely shared her blessings with her family and friends whose lives were thereby wonderfully enriched. Karol greatly enjoyed her early retirement years in Sun City West as an active member of the local tap and dance show teams, notably Jan’s Jazz Dancers, the Red Hat Society and Shepherd of the Hills United Methodist Church. She particularly enjoyed time she shared with the friends she made over many years of rehearsals, musical performances and social gatherings. Karol is survived by her three children: Mark Hall of Westminster, California; Jana Pickles of Sydney, Australia; Kary Crouch of Galveston, Texas, and their families including spouses Marilyn, Graham and John and five grandchildren Gavin Marklin Hall, Shelby Rae Hall, Phillip Cody Welty, Clinton Tyler Welty, and Kristin Marie Hymel, along with many friends and extended family members. Karol was preceded in death by her parents. A celebration of Karol’s life will be held in a memorial service at 3:00pm on Friday, May 21, 2021 at Floral Haven’s Funeral Home Chapel in Broken Arrow. ***Services will be live streamed starting at 2:55 p.m. on Friday, May 21, 2021. To view the service live, please click on the following link: http://webcast.funeralvue.com/events/viewer/53700

The family of Karol Jean Hall created this Life Tributes page to make it easy to share your memories.

Send flowers to the Hall family.