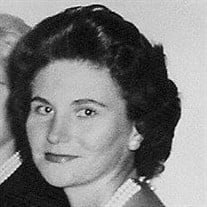 Katherine Ruth Cole, 86 of Tulsa, passed away Friday May 29, 2020 at the Porta Caeli House in Tulsa. On April 3, 1934, Ruth was born at Harrisburg Hospital in Harrisburg, Pennsylvania to Henry Bitz and Katherine (Rudolph) Bitz. She was at the top of her Confirmation class at Trinity Evangelical Lutheran Church in Steelton, Pennsylvania. Ruth was an honor student at Swatara Township High School in Oberlin, Pennsylvania where she graduated on June 2, 1952. Ruth’s parents owned Bitz’s Food Store in Steelton, Pennsylvania. The store was closed during World War II and reopened on January 13, 1950. Ruth worked in the store while she was in high school and after she graduated. In November 1956, Ruth’s parents sold the store and had a custom house built in Cedar Cliff Manor in Camp Hill, Pennsylvania. Ruth and her parents moved in the new house in November 1956. As a child and young adult, Ruth enjoyed going to the beach especially Atlantic City, New Jersey. She also enjoyed trips to New York City to watch Broadway musicals. In January 1958, Ruth started working as a civilian at Olmstead Air Force Base in Middletown, Pennsylvania and worked there until she got married in 1963. She worked for Colonel Grove and later for General Miller. During the Cuban Missal Crisis, Ruth worked in the war room. On July 26, 1963, Ruth met James Kenneth Cole of Shreveport, Louisiana on a blind date. James was a chemical engineer working in Pennsylvania on a job for Texas Eastern. On October 23, 1963, Ruth and James were married Camp Hill. The couple moved to Shreveport, Louisiana and later Ruston, Louisiana where James completed his Masters in Science in Chemical Engineering. In 1965, the couple and their son moved to Camp Hill, and in 1966, they moved to Wilmington, Delaware. Ruth and James raised their three children in Wilmington, Delaware, and the family moved to Tulsa in August 1978. Ruth was an amazing wife, mother and grandmother. She was very religious. Ruth was an avid reader. She read to her children and later her grandchildren. Ruth was an excellent cook, and she loved to bake. She was known for her nut strudel and various Christmas cookies. Ruth enjoyed watching Jeopardy and was still watching in May 2020. She also loved to watch period pieces especially the 1995 version of Pride and Prejudice Ruth loved history, and she passed this on to her children. Her ethic German parents immigrated to America from Austria-Hungary as young children with their parents, and therefore, Ruth was first generation born in America. She could speak English and German before she started school. In 1940, Ruth and her parents went to the 1939-40 New York World’s Fair where she was able to look at New York City from the head of the Statue of Liberty. Ruth loved visiting historical places with her husband and children especially Colonial Williamsburg. Ruth was proud that her daughters and granddaughter are members of Daughters of the American Revolution. She loved hearing about her genealogy and also her husband’s family tree. Ruth is survived by her husband of 56 years James Kenneth Cole of Tulsa; son James K. Cole, Jr. and his wife Marie E. (Kiene) Cole of Fayetteville, Arkansas; daughter Susan R. Cole of Tulsa; daughter Katherine A. (Cole) Burnett and her husband Bryan M. Burnett of Broken Arrow; grandson Andrew M. Burnett of San Francisco, California and granddaughter Bridgette A. Burnett of Broken Arrow. On June 5, 2020, a private family service was held at 3:00 pm in Floral Haven Funeral Home Chapel with the internment at Floral Haven Cemetery. Donations may be made in her honor to the Porta Caeli House in Tulsa (918-935-2600) online at portacaeli.org) or the American Cancer Society online at www.cancer.org/.

Katherine Ruth Cole, 86 of Tulsa, passed away Friday May 29, 2020 at the Porta Caeli House in Tulsa. On April 3, 1934, Ruth was born at Harrisburg Hospital in Harrisburg, Pennsylvania to Henry Bitz and Katherine (Rudolph) Bitz. She was at the... View Obituary & Service Information

The family of Katherine Ruth Cole created this Life Tributes page to make it easy to share your memories.

Send flowers to the Cole family.