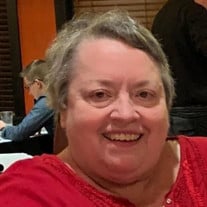 Katherine “Kathy” Kittrell Pettifer passed away on January 11th, 2022, at the age of 69. Kathy was born in Texarkana, Texas. Her east Texas drawl was often most notable when she was excited or annoyed. She entertained her family with many wonderful stories of growing up in Texarkana. After graduating from St. James Day School and Texas High she attended Emory University in Atlanta for one year. After finding Emory in the 1970s a little too exciting for a girl from east Texas she decided to transfer to Rhodes College in Memphis were she graduated with a bachelors degree. She later obtained an MBA from Baylor University. While most of her family resided in Texas she decided to move to Tulsa to work for PSO after a family friend raved about Tulsa. While working at PSO, one of her co-workers asked her to go on a blind date with her son, Stephen “Steve” Pettifer. Little did she know that Stephen would become the love of her life and a 43 year marriage would follow. After working at PSO she went to work for ONEOK and retired from there after 34 years of employment. The marriage of Steve and Kathy produced three boys, John, Derek and Thomas. Unfortunately, Thomas was lost at birth. He was a stillborn. Tragedy was a constant theme in Kathy’s life. Her father and sister died when Kathy was a child. Despite these tragedies, Kathy always had a pleasant disposition and outlook on life. Kathy enjoyed classic movies and musicals. She also enjoyed a good romantic comedy or Hallmark movie. She enjoyed traveling and some of her favorite travel locations were Colorado, Destin, Kansas City, and Dallas. She most enjoyed spending time with her children and grand-children, Henry and Caroline. She will be deeply missed by her family. Kathy Pettifer was preceded in death by her parents Thomas Jr. and Frances Kittrell. Her sister Frances Anne Kittrell and her son Thomas Pettifer. Kathy is survived by her husband, Stephen Pettifer, two children John and Derek Pettifer, her daughter-in-law Abby Alberts Pettifer, and grandchildren Henry and Caroline Pettifer. She is also survived by her brother Bill Kittrell, two sister-in-laws Teresa Crane and Ann Kittrell, and one brother-in-law Jerry Crane. Kathy leaves behind 4 nieces and one nephew: Amy Persall Smith, Kim Persall Wallace, Emily Persall Capps, T.J. Kittrell, and Emily Kittrell. Her funeral services will be Thursday January 20th at 1 P.M. at St. Dunstan’s Episcopal Church in Tulsa. A memorial fund has been set up with the Ovarian Cancer Research Alliance at https://give.ocrahope.org/fundraiser/3651717. Please consider donating. The family request if everyone can wear a mask during viewing and the service.

Katherine &#8220;Kathy&#8221; Kittrell Pettifer passed away on January 11th, 2022, at the age of 69. Kathy was born in Texarkana, Texas. Her east Texas drawl was often most notable when she was excited or annoyed. She entertained her family... View Obituary & Service Information

The family of Katherine Kittrell Pettifer created this Life Tributes page to make it easy to share your memories.

Send flowers to the Pettifer family.