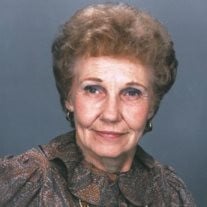 Kathryn was preceded in death by her parents Nina and William Armstrong, and siblings Frank, Francis, and Bill. She moved to Tulsa from Topeka, Kansas, to manage Dillard’s Department Store and Beauty Salon downtown and later opened and managed Slouthland in downtown Tulsa. She loved bingo, dancing, flashing jewelry, circus peanuts, cigarettes, stinky perfume, growing tomatoes on her patio, avoiding credit card interest and meeting the Pope. Always the center of attention, her sharp-witted sense of humor will echo in our memories. A brilliant business woman who began her career during the depression at the age of 15 washing hair in a beauty shop to pay for cosmetology schooling and beauty license later excelled in an executive role with Helene Curtis. She loved to recall the time she told Paul Mitchell that he couldn’t be the star of a beauty show because of his dirty ponytail. Even after her official retirement she continued her own private manicure business from her apartment as an opportunity to serve wine to enjoying clients and friendships she treasured. Graced by five generations whose photos lined her walls: son Frank a Chrisbens and wife Ann, their children, Christopher, Courtney and John Kelly; great grandchildren Parker, Chase, Trevor Isabella and Beck. Daughter Marcia Fox and husband Bill, their daughters, Cynthia, Christy and Michele; great-grandchildren Richard, Christine, Kaylee, David, Michael, Amy, Hunter, Natalie and Gabriel. Great-great grandchildren Beckham, Madisyn, Colston, Brynlee & Jenson; born since her passing. Funeral for family and close friends will be held at Parkview Baptist Church; June 14, 2014 at 11:00 A.M. In lieu of flowers donations can be mailed to Parkview Baptist Church. Interment at Floral Haven Mausoleum Chapel. Broken Arrow, OK.

Kathryn was preceded in death by her parents Nina and William Armstrong, and siblings Frank, Francis, and Bill. She moved to Tulsa from Topeka, Kansas, to manage Dillard&#8217;s Department Store and Beauty Salon downtown and later opened and... View Obituary & Service Information

The family of Kathryn J. Hetherington created this Life Tributes page to make it easy to share your memories.

Kathryn was preceded in death by her parents Nina and William...