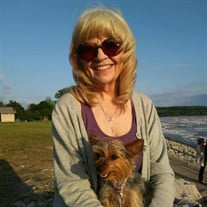 Kathryn Lee Hoppes, 72, of Sand Springs, Oklahoma left us to soon after putting up a brave fight with ALS on July 20, 2020, with her loving partner Jerry McDaniel, and daughters Kimberly Sehon, Gena Morrow, Tasha Barley, Son-In-Law John Morrow and adored Granddaughters Evyn and Elyse Morrow at her side. Kathy was born July 24, 1947, to Jackie Lee Hoppes and Vivian Marie York. She spent her childhood growing up in Keystone, Oklahoma and spent most of her time outside at The Arkansas River with little sister Jacque. Her favorite memory of growing up was spending time traveling the United States with her Nonnie and Grandpa. She married her first husband, Robert Dee Sanderson and moved to Olive, Oklahoma where they had a Son Troy and daughter Kimberly. While raising two children she went to Beauty School and became a Hair Dresser. She then moved on to become a model for Vandevers and other small events, where she then met her second husband Richard Gene McCorkle. They traveled many places and lived in England for a year before moving back to Sand Springs, Oklahoma with his parents Richard and Helen McCorkle, where she learned how to cook many delicious dinners. They then moved to Tulsa and had twin girls Gena and Tasha. They started a hair salon together and took many vacations to the Lake and Hot Springs, Arkansas with family. Her and Richard entertained many Family get together’s at the Family Pool. She moved on to work in the upholstery business and created many beautiful pieces for Happy Clients. She then married Raymond Leslie Bingham and they had a Country Music Promotion business they worked together. Where she was able to meet a lot of great friends in the music business like Reba McCentire, Garth Brooks, Mel Tillis, Allen Jackson, Vince Gill and many others. They lived in Claremore Oklahoma on a 40 acre Ranch where she was able to enjoy raising and taking care of her horses, long horn steers, deers, dogs, cats, and chickens. She then was able to go back to one of her passions, Art. She created many beautiful paintings for her children and grandchildren to cherish. She worked the Stock Yards moving cattle and Horses, one of her favorite things to do. She then moved on and found the love of her life Jerry McDaniel where she was able to spend time at the drag races, made many new great friends, and lots of traveling. Her most treasured time was when their grandkids would came over and ride the golf cart to the store to get ice cream, sit on her beloved porch with her and listen to her fountain, or paint beautiful pictures while watching the hummingbirds feed. She was a wonderful lady who could cook like no other and could make a complete stranger her new friend in a heartbeat. She was one that could sell ice to Eskimos with a wink and a smile. She was loved by everyone who was blessed to be in her life. She always had a smile and a hug for anyone who needed it. She loved to sing and dance especially in the car on shopping trips and many outings with her kids and grandkids. She loved music, books, movies, and any kind of social event. She was one of the most beautiful people you could ever have the pleasure of meeting. She was survived by her adoring love Jerry McDaniel, mother Vivian York, sister Jacque Botefuhr, son Troy and (Cindy) Sanderon, Daughters Kimberly and (Randy) Sehon, Gena and (John) Morrow, Tasha McCorkle-Barley. Step Children Chad McDaniel, and Scotty and (Sharon McDaniel). Grandkids, Kelly and (Charlie) Baum-Sehon, Casey and (Brieanna) Sehon, Skye and (Erin) Sanderson, Taylor and (Ashley) Sanderson, Alexa, Evyn, and Elyse Morrow, Trent Sweeney, Vin Barley, Kyle, Conner, and Lyndsey McDaniel, Isabel, Mason and Jacob McDaniel and Great Grandkids, Lydia Sanderson, Jaxon Sixkiller, and Tammy and Vincent Thompson. Special daughter Lindsay and Olivia Diaz. On her 73rd Birthday July 24, 2020, Kathryn will be laid to rest at Floral Haven Cemetery. In lieu of flowers, memorial donations may to the ALS Foundation for Life, [email protected]

The family of Kathryn Hoppes Mcdaniel created this Life Tributes page to make it easy to share your memories.

Kathryn Lee Hoppes, 72, of Sand Springs, Oklahoma left us to...

Send flowers to the Hoppes family.