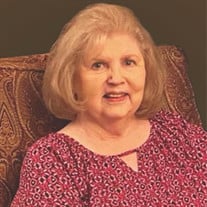 Kaye was born on December 26, 1939 to Alvin O. Bowers and Viola B. (Batchelor) in Oklahoma City, Oklahoma where they lived for the first five years of her life. She was their only child. Her family moved to Stroud when Kaye was five years old. She attended Stroud Schools all but her junior year when her dad took a job at the Kendrick gasoline plant. Kaye returned to Stroud to complete her senior year of high school and graduated with the class of 1958. Kaye was an accomplished pianist. She started piano lessons in the second grade and continued through high school. She played the piano at many school functions and accompanied many students in vocal music and band in the district and state contests. She also played the piano for many functions at church. She and her mother and dad were active members of First Baptist Church at Stroud. Her husband James also grew up in Stroud where his parents were educators and also members of the First Baptist Church at Stroud. Kaye enrolled in summer school at Oklahoma State University after high school graduation to begin her pursuit of a college degree in elementary education. She and James both attended their freshman year at OSU. After freshman year they both transferred to Central State University at Edmond. Kaye and James were married on June 4, 1960 at First Baptist Church Stroud and began their lifelong commitment to each other, and both preparing to become educators. Kaye completed her college degree in elementary education in August of 1961. She was hired to teach first grade at Choctaw, OK, where they moved so she could teach and James finished his college degree in 1962. After James graduated they were both hired by the Crescent Schools. She taught first grade and James taught and coached junior high. While living in Crescent, they joined the First Baptist Church and Kaye became the church pianist. In 1964, they moved to Chickasha Schools. Kaye continued to teach first grade and James taught and coached in junior high. Kaye and James moved to Tulsa in 1966. James taught and coached in the Tulsa Schools. Kaye was expecting their first child and did not teach for five years. Their daughter Kimberly Ann was born on December 20, 1966. This was a very exciting and happy time for Kaye and James. In 1970, Kaye and James moved to Ada where James took another job and Kaye attended graduate school at East Central State University and received her master’s degree. In 1972, they moved to Moore where they both were employed by the Moore Schools. Kaye taught seventh graders with learning disabilities. She later went back to teaching elementary students. In 1974, they moved to Owasso where Kaye taught transitional first grade. In 1976, the family moved to Broken Arrow where Kaye and James were employed by the Union School District. Kaye taught transitional first grade at Boevers Elementary for two years before transferring to Peters Elementary, a new elementary school at Union. This was her dream job. She taught kindergarten there for 17 years. Kaye’s strength was teaching reading. She was very skilled in teaching phonics. Through the years she attended many reading workshops and took post graduate classes to be current on the best methods of teaching. Kaye would always tell her kindergarten kids on Fridays that tomorrow (Saturday) is cartoon day and Sunday is Sunday School day. She would ask her students on Monday if they got to go to Sunday School. She retired on June 30, 1995. After retirement, she did another special job- taking care of her grandchildren while their parents were working. She always made sure to have all their favorite foods for them to eat at her house. Kaye also enjoyed hosting family and friends in their home, especially holidays. Kaye was saved at the age of nine in August of 1949 during the morning worship service at First Baptist Church in Stroud. She was a strong Christian and true to her faith for 71 years. She believed strongly in faith, family and education. She was a faithful, loving wife, a wonderful mother, grandmother and great grandmother. She was also a great educator. Kaye and James were married for 61 years and were blessed with a wonderful family. Kaye was preceded in death by her parents Alvin and Viola Bowers. Survivors include her husband James, daughter Kimberly Ann Roark and husband Mike, granddaughter Ginger Sullivan and her husband Kyle, grandson Nick Roark and fiance’ Addi Corbin and great grandchildren Piper Grace Sullivan and Beau Grant Sullivan and numerous extended family and friends. Memorial services will be held at 2 pm on Thursday, August 19 at First Baptist Church of Broken Arrow. In lieu of flowers, the family has requested memorials be made to The Baptist Children's Home - Owasso, 12700 E 76th St N, Owasso, OK 74055.

Kaye was born on December 26, 1939 to Alvin O. Bowers and Viola B. (Batchelor) in Oklahoma City, Oklahoma where they lived for the first five years of her life. She was their only child. Her family moved to Stroud when Kaye was five years old.... View Obituary & Service Information

The family of Kaye Patton created this Life Tributes page to make it easy to share your memories.

Send flowers to the Patton family.