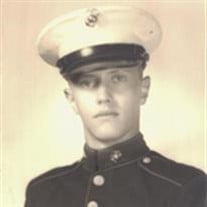 Kenneth August Gadlage was born in Louisville, Kentucky, on November 6, 1930, to August and Anna Mae (Wirth) Gadlage.Â He passed from this life early Thursday morning, March 31, 2011, after a short illness.Â Young Ken was an avid swimmer and sailor, spending much of his youth on the Ohio River.Â Â  Kenâ??s mother, a devout Catholic, envisioned raising her five kids to become 2 priests and 3 nuns (she was only rewarded with one nun).Â After a brief time in the Seminary, Ken enlisted in the U.S Marines in 1951.Â After Jet Maintenance Training at Memphis, he was stationed in Japan to work on U.S. aircraft during the Korean conflict.Â After attaining the rank of SSgt, he was honorably discharged from the service in 1953. He eventually came to Oklahoma to attend Spartan School of Aeronautics and pursue his dream of working in the airline industry.Â It wasnâ??t long before fate intervened, and he met his future wife of 50 years, Erlene Fanning of Porter, Ok.Â They were married in Louisville on September 1st, 1956. After a few short stops in Wichita, Kansas and Dallas, Texas, they returned to the Tulsa area where they lived for the remainder of their lives.Â Kenâ??s children will tell you he ran the family home a lot like he commanded his Marine reports as a Sergeant in Japan â?? plenty of KP duty, room cleaning, and clean-ear inspections before Mass on Sunday!Â He was an avid radio control modeler, building scale models of a B-29 bomber, a Piper J3 Cub, a Vaught F4U Corsair, and numerous other planes he gained familiarity with over the years during his time in the Marines and as an American Airlines mechanic.Â He would almost never fly them â?? as he had invested way too much work in his planes to risk a crash landing!Â But one set of twin fighters he built was too tempting.Â One Saturday morning he set off to Mohawk Park with three of the young Gadlageâ??s in tow and his prized fighter planes in the trunk.Â It wasnâ??t long before he â??landedâ?? one in a tall oak tree.Â But it was not to be lost forever â?? once he drove home, grabbed his shotgun and went back out to shoot it out of that tree!Â He hardly ever flew one of his models after that.Â He was also an avid gardener and fisherman, and for many Saturdays after retirement he and Erlene could be found at the Tulsa Flea Market setting up their booth and selling her one-of-a-kind creations.Â  Ken was predeceased by his parents, by his beloved wife on January 4, 2007, and by his brother Paul of Louisville, KY in March 2007. Â He is survived by three sisters â?? Nancy Gadlage of Chula Vista, CA, Phyllis Manning of Louisville, KY and Mary Ann Weyhing and husband David of Louisville, KY. Â He is also survived by four children:Â daughters Judy Gadlage and husband James Lawrence of Tulsa, Kelly Creekmore and husband Chris of Grove, Teresa Coppage and husband Terry of Broken Arrow and son Russell Gadlage of Coweta. He is survived by 12 grandchildren and 3 great-grandchildren. Our dad was a devout, intelligent and skilled man who always loved a good laugh. His kindness and devotion to his family will never be forgotten.Â We will miss him deeply. Â But we also realize he and mom led a full and independent life, and we are grateful to have shared so much of it with them. A funeral mass will be held on Saturday, April 2, 2011, 10:00 AM, St. Vincent De Paul Church in Coweta with interment following at Floral Haven Memorial Gardens.

Kenneth August Gadlage was born in Louisville, Kentucky, on November 6, 1930, to August and Anna Mae (Wirth) Gadlage.Â He passed from this life early Thursday morning, March 31, 2011, after a short illness.Â Young Ken was an avid swimmer and... View Obituary & Service Information

The family of Kenneth A. Gadlage created this Life Tributes page to make it easy to share your memories.

Kenneth August Gadlage was born in Louisville, Kentucky, on November...