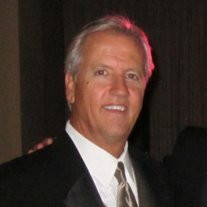 Kenneth Dale Gray, age 64, of Broken Arrow, Oklahoma passed away July 14th, 2013. Born January 8, 1949, in Tulsa, Oklahoma, to Leonard and Ethel Gray (both deceased) Kenneth was the youngest of two children. â??Kennyâ? or â??Kenâ? as his friends and family knew him, had a successful career as a businessman and went on to become a successful entrepreneur as a Billy Sims BBQ franchisee with two restaurants in the Tulsa area. However, Kenâ??s greatest achievements are his three sons. All were his pride and joy. After dating for nine years, Ken and his beloved, Jackie Waid, 52, were to be united in marriage, until both met their untimely death doing one of the things they loved most, which was riding their Harley Davidson motorcycle. Our hearts break at this loss and we will sorely miss his humor, his love, and we could not have asked for a better father, grandfather, uncle and friend. Ken is survived by his elder brother, Jim Gray, three sons: Ryan, Steven and Conner Gray, three nephews: Shane, Scott and Chad Gray, and two grandchildren, Max and Elianna Gray. Memorial services are to be held Friday, July 19 at 11:00 am at Destiny Church 1700 S. Aspen Ave Broken Arrow Ok 74012. Flowers or an in-kind donation to the church may be sent to Destiny Church.

The family of Kenneth Dale Gray created this Life Tributes page to make it easy to share your memories.