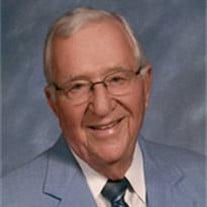 Kenneth West Stephens, passed away Wednesday March 21, 2012 at the age of 87. Ken and his twin brother Klyde were born on May 25, 1924 in Sedalia, Missouri to his parents Benjamin Thomas and Hazel (West)Â Stephens. The family moved to Fort Smith, Arkansas where Ken graduated from Fort Smith Arkansas High School in 1942. In 1943 he enlisted with the Navy during World War II and served for three years. After serving in Guam, he was stationed in Napa, California where he met his wife, Rayona Curry. Upon completion of his military service, Ken graduated from San Jose State College in 1951, they moved to Fort Smith and then Tulsa. Ken went to work at American Airlines as a Manager in the Purchasing Group and retired after 25+ years of service. After 57 years of marriage, Rayona passed away in 2002.Ken will always be known for the pride he had in his family, his many close friends, his love of golf and music and his devotion to his many dogs, most recently Bentley. Ken may be known best for his homemade peanut brittle that he shared all around Tulsa as well as his wonderful Bloody Maryâ??s! If you were lucky enough to be on the receiving end of the peanut brittle, or the Bloody Mary, you never forgot it!Ken is survived by his son, Phillip M Stephens (Judy), daughter, Carolyn Stewart (Bruce), grandsons, Todd Stewart (Mandy), Phillip A Stephens (Carla), Christopher Stephens (Sarah), granddaughters, Tina Owens (Anthony) and Melanie Goldman (David), twelve great-grandchildren, sister, Marian Sengel, and several nieces and nephews. He was preceded in death by his wife Rayona, parents Hazel and Benjamin Stephens, sister Elizabeth Kellar, brothers Jack and Klyde Stephens.A memorial service is scheduled for Monday, March 26, 10:30 a.m. at First Christian Church, 913 South Boulder Avenue, Tulsa. In lieu of flowers donations may be made to the Humane Society of Tulsa or Meals on Wheels, Tulsa. Floral Haven Funeral Home 918.252.2518

Kenneth West Stephens, passed away Wednesday March 21, 2012 at the age of 87. Ken and his twin brother Klyde were born on May 25, 1924 in Sedalia, Missouri to his parents Benjamin Thomas and Hazel (West)Â Stephens. The family moved to Fort Smith,... View Obituary & Service Information

The family of Kenneth W. Stephens created this Life Tributes page to make it easy to share your memories.