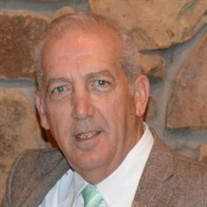 Kenton Leon Meyers, 67, of Wagoner, passed away Monday December 13, 2021, at his home surrounded by family members. He was born November 22, 1954, in Oklahoma City to Billy and Willene Meyers. Kent was preceded in death by his parents: Billy and Willene Meyers. He is survived by his wife, of 29 years, Betty of the home. Seven children, Tracy McGuire, and husband Tim of Harrah Ok., Jason Mainard and wife Kelly of High Ridge, Mo., Christa Determan, and husband Jack of Harrah OK., Jennifer Mainard of Tulsa Ok., Sara Snyder of Broken Arrow, Ok., Melissa White and husband Mike of Guthrie OK., Amanda Hughes and husband Bret of Mounds, OK., 23 grandchildren, 9 great grandchildren and two siblings Pamela Burgess, Linda Fancher, and husband Mike. Kent had many interests throughout his life. Outside of the love he had for his wife, Betty and his family, his other loves were golfing, fishing, and Karaoke. Kent was a local KJ to the Tulsa and surrounding areas for more than 15 years, entertaining those with his amazing voice. If you didn’t find him at the lake, on the golf course, or working around the house, you could found find him in front of the TV watching golf or si fi. Being an avid Sooner and Thunder fan there were always lots of yelling at the TV on Saturday afternoons or throughout the evening during the week. Kent worked in the wireless industry for over 15 years, prior to his retirement in 2019. Over that time, he traveled many, many miles to various states performing site audits, attending company functions as well as participating in surrounding state wireless association socials and golf tournaments. His involvement with these associations provided the opportunity to make new business partnerships as well as friends, and friends he had many. This also allowed him to work with the Arkansas Oklahoma Wireless Association where he served as lead social committee member. Throughout the years he was active in scheduling and coordinating the annual Charity Golf Tournament where, with his help, the AOWA has raised and donated over $330 thousand dollars to the Folds of Honor Foundation. He was also one of the original committee members on the South Wireless Association, helping organize the first event in Tunica, MS, with just over 90 attendees. That association now holds an annual event in Nashville with more than 800 attendees raising funds for scholarships which are awarded to families within the wireless industry. Kent was loved by many and will be dearly missed. A Celebration of Life Memorial Service will be held 3:00 PM, Wednesday, December 22, 2021 at the Floral Haven Funeral Home Chapel in Broken Arrow, OK.

Kenton Leon Meyers, 67, of Wagoner, passed away Monday December 13, 2021, at his home surrounded by family members. He was born November 22, 1954, in Oklahoma City to Billy and Willene Meyers. Kent was preceded in death by his parents: Billy... View Obituary & Service Information

The family of Kenton Meyers created this Life Tributes page to make it easy to share your memories.

Send flowers to the Meyers family.