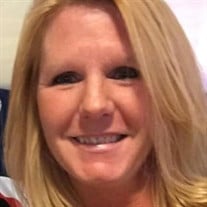 Kristen Janine Boerner, 52 of Bixby, OK, passed away July 28, 2021 in Tulsa surrounded by her loving family and friends. She was born January 31, 1969 in Tulsa, OK to Daryl and Janet Murphy. Kristen was an avid fan of Oklahoma State football, as well as watching golf, tennis, and the Olympics. She loved travelling, with Hawaii and Key West being some of her favorites. Kristen was independent, resilient, and a fighter. She was an unfiltered spit-fire who would tell you how it is and would do anything for her family and friends. But she loved most being ‘momma’ to her four kids and four grandchildren. When her time with us was winding down after a long battle with ovarian cancer, she attacked her bucket list with the same determination she had in life. In her last 90 days, Kristen traveled with her 12 year old twins to Disneyworld, New York City, and Dallas for her nephew’s wedding and even went sky diving for her first time ever. Kristen was not going to let her battle keep her down! Kristen was preceded in death by her husband Eugene Guy Boerner III (1/10/2010). Kristen is survived by her children Ashley and Tyler Thurman, Cate and Pierce Boerner of Bixby; her parents, Daryl and Janet Murphy of Broken Arrow; mother-in-law Carla Boerner of Tulsa; brother Darren Murphy and wife, Carey of Grayslake, IL; sister-in-law Dr. Shannon Boerner Boughner of Tulsa, OK; and 4 grandchildren, Clayton, Carson, Bennett, and Hudson. A memorial service to celebrate Kristen’s life will be held at Floral Haven, 6500 South 129th East Ave., Tulsa, OK 74012 on Thursday, August 5th at 3pm with visitation beforehand from 1:30pm – 3:00pm. Memorials in lieu of flowers may be made in her honor to the Porta Caeli House online at www.portacaeli.org. The family wishes to extend our sincere thanks to Dr. John Saurino, Dr. Michael Gold, the oncology nurses at St. Francis, the Porta Caeli caregivers and all her beloved family and friends that supported her during her time of need.

Kristen Janine Boerner, 52 of Bixby, OK, passed away July 28, 2021 in Tulsa surrounded by her loving family and friends. She was born January 31, 1969 in Tulsa, OK to Daryl and Janet Murphy. Kristen was an avid fan of Oklahoma State football,... View Obituary & Service Information

The family of Kristen Boerner created this Life Tributes page to make it easy to share your memories.

Send flowers to the Boerner family.