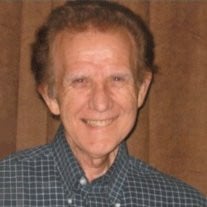 Larry C Gunn of Broken Arrow, OK born March 1, 1942 in Dallas, TX, passed away April 30, 2013 in Tulsa, OK. He is survived by his wife of 43 years, Pam Gunn, along with 3 Daughters, Ronna Chapman of Yorktown, TX, Stacy Anderson and son-in-law Kyle Anderson of Coweta, OK, Kayla Martinez and son-in-law Felipe Martinez of Coweta, OK. 3 Granddaughters, Channing Anderson, Elena Anderson, and Reece Anderson, 1 Grandson, Brady Martinez, And, Baby Martinez (Due Sept 2013), 1 Brother, Darrel Gunn of Harlingen, TX. He is preceded in death by a brother Eugene Gunn, mother Imogene Gunn, and father O.C. Gunn. He worked as a Mechanical Principle Designer and Draftsman for 50 years in the Texas and Tulsa Area. He retired from Willbros Engineering in July 2012. He was a faithful Christian and a wonderful husband, father, Papa, brother, son, and friend to many. He loved his family and always put them first. He enjoyed playing golf and spending time with all his grandchildren. He will be dearly missed by all that knew him and loved him. Because he really believed in missionary work, in lieu of flowers please donate to Baptist Medical Missions International: BMA Department of Missions, PO Box 30910, Little Rock, AR 72260 BMMI In Memory of Larry Gunn

The family of Larry C. Gunn created this Life Tributes page to make it easy to share your memories.