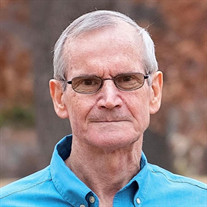 Larry Dee Hern lost his two-year battle with pancreatic cancer on January 5, 2021 in Grove, Oklahoma, surrounded by his family. Larry was born on October 15, 1949 in Burlington, Iowa to Leonard Dee and Helen (Powell) Hern. He graduated from Burlington High School and went on to attend the University of Iowa where he received a Bachelor of Science degree in Mechanical Engineering and a Master of Business Administration degree. He also later acquired a Master of Science in Accountancy degree from De Paul University in Chicago. Larry married Martha (Marti) Louise Larson on June 5, 1971 and they remained happily married for 49 years until his passing. Larry & Marti had two children, Laura Malinda and Eric Larson, of whom he was immensely proud. Larry was a proud member of the United States Air Force from 1971-1975 where he was a navigator aboard the refueling tanker KC-135. During this time, he and Marti made many life-long friends. Larry’s professional life began with Amoco Oil in Chicago where he was a systems analyst. He continued with that profession throughout his career, working for British Petroleum, Price Waterhouse and IBM, which resulted in his family moving to West Des Moines, Iowa and then Tulsa, Oklahoma. Larry loved sports, whether watching the Iowa Hawkeyes, Oklahoma Sooners, Chicago Cubs or Minnesota Vikings. In his retirement years, Larry’s life-long dream of living on a lake came true as he and Marti built a home on Grand Lake in Grove, Oklahoma, where they hosted many visitors in the summer months. His six grandchildren brought him tremendous joy, whether watching them enjoy the lake or attending their various activities. Larry was preceded in death by his parents, Leonard Dee and Helen Hern. Larry was greatly loved and will be dearly missed by his wife, Marti; daughter and son-in-law Laura and Austin Pollard of Greenwood, SC, son and daughter-in-law Eric and Amy Hern of Broken Arrow, OK; grandchildren Aubrey, Connor and Mallory Pollard and Hannah, Zachary and Maggie Hern; sister Judy Ray and brother & sister-in-law Greg and Sandy Hern. In lieu of flowers, the family request memorial donations to be made to the American Cancer Society. . ***FOR THOSE THAT CANNOT ATTEND THE SERVICE IN PERSON, PLEASE COPY AND PASTE THE FOLLOWING WEB ADDRESS IN YOUR BROWSER OR CLICK ON THE LINK: THE LIVE STREAM WILL START AT APPROXIMATELY 9:45 AM. IF YOU DO NOT SEE THE LIVE FEED, PLEASE REFRESH THE PAGE UNTIL IT APPEARS*** http://webcast.funeralvue.com/events/viewer/44657

Larry Dee Hern lost his two-year battle with pancreatic cancer on January 5, 2021 in Grove, Oklahoma, surrounded by his family. Larry was born on October 15, 1949 in Burlington, Iowa to Leonard Dee and Helen (Powell) Hern. He graduated from... View Obituary & Service Information

The family of Larry Dee Hern created this Life Tributes page to make it easy to share your memories.

Send flowers to the Hern family.