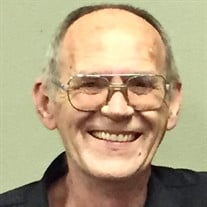 Larry George Lesher, 70, resident of Tahlequah, Oklahoma passed away on January 13, 2020. Larry was born January 27, 1949 in Oklahoma City, Oklahoma to Lloyd and Norma Lesher. Larry graduated from East Central High School in 1968 and then went on to serve in the United States Air Force. Larry retired as a machinist and provided his expertise for many years to several local machine shops. His hobbies included crappie fishing, small engine repair, and watching old western movies. Larry is survived by his daughter, Melanie Beil and her husband, Brian Beil, of Tulsa, Oklahoma and his grandchildren, Zane, Felicia, and Ginger Beil. Other surviving family include his nephew, Adam Lesher and his wife, Bertie Lesher, along with their children, Elizabeth and Caroline Lesher of Owasso, Oklahoma. He was preceded in death by his parents, Lloyd and Norma Lesher, and his brother, Mike Lesher. No services are planned.

The family of Larry George Lesher created this Life Tributes page to make it easy to share your memories.

Send flowers to the Lesher family.