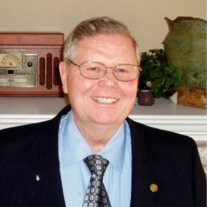 Larry Joe Walden was born July 2, 1938 (Age 74) in Kokomo, Indiana to Freida and Don Walden. He lived in a number of places with his birth mother, relatives, and foster homes. When he was 13 he was moved to Bartlesville, OK to live with his father. Several months later, he was taken into the home of E.S. and Lucile Hinshaw and their three children Stanley, Kenneth, and Reta, who became his foster family. Larry was united in marriage to Sharon K. Walden on June 3, 1960 and they had two children; Timothy J. Walden and Sheri M. Walden. After the death of Sharon in 2010, he was united in marriage to Melody A. Watts on June 18, 2011 and the family increased with her son, Billy D. Watts. Larry attended Bartlesville schools he was active in Highland Park Baptist Church and enjoyed the Boy Scouts where he became an Eagle Scout. He worked at the Y.M.C.A. for one year, and Reda Pump three years before graduating from Bartlesville College High School in 1956. During college days at Oklahoma State University, he was on a five member R.O.T.C. 1958 rifle team and won the National 1st place â??Randolph Hearst Awardâ? for outstanding marksmanship. Larry belonged to a number of organizations during his career. He was a life member of the Horseless Carriage Association, life member of National Rifle Association, a national award winner of the Kiwanis Club, received the Distinguished Kiwanis Presidents Award, coached girls Little League Softball winning the state championship five years in a row, the past President, Treasurer and Life Member of the Special Forces Association Chapter â??Lâ?, member of the Oil Capitol Rod and Gun Club, Tulsa Military Vehicle Club, and Past President of the Military Gun and Collectors Club. Larry retired as a Major in the Special Forces (Green Beret) in 1977. He retired from Phillips 66 Advanced Composites as an engineer in 1991. Larry then did consulting work until 1995. He later taught at Bartlesville Tri-County Tech School for five years then until the time of his death taught Industrial Engineering for Oklahoma State University Institute of Technology. Larry was a member of Riverview Baptist Church, in Bixby, OK, where he enjoyed teaching the menâ??s Sunday school class. He has been attending Community of Christ Church in Broken Arrow, OK since 2011. Larry was a master parachutist, private pilot, raised a garden each year and shared it with his neighbors, loved to hunt and fish, and had a number of trophies on his shop wall. Larry loved to travel and was very adventurous. He enjoyed visiting with friends and family and helping people. Larry was a wonderful and caring Husband, Father and Grandpa (Papa). He is survived by his wife Melody A. Walden of Broken Arrow, his son Timothy J. Walden and his wife Lori D. Walden of Broken Arrow, OK , his daughter, Sheri M. Walden and her wife Natalie A. Reid of Surfside Beach, SC, his step-son Billy D. Watts of Tulsa, OK and his only grandchild, Lilian D. Walden. Funeral Service will be held at 11am March 16, 2013 at Community of Christ Church, 310 N. 15th Street, Broken Arrow, OK 74012

Larry Joe Walden was born July 2, 1938 (Age 74) in Kokomo, Indiana to Freida and Don Walden. He lived in a number of places with his birth mother, relatives, and foster homes. When he was 13 he was moved to Bartlesville, OK to live with his... View Obituary & Service Information

The family of Larry Joe Walden created this Life Tributes page to make it easy to share your memories.