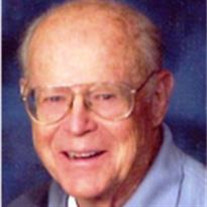 Latham Loomis “Larry” Brundred, Jr., was born in Tulsa on March 20, 1922, to Latham Loomis Brundred and Jean Miller Brundred.Â He passed away gently in his sleep on February 17, 2012, in Tulsa, Oklahoma, at the age of 89.Â Larry graduated from Taft Preparatory School in Watertown, CT, and theÂ California Institute of Technology in Pasadena, CA.Â Â  He served in the United States Air Force during World War II as an Engineer on B-29’s.Â As a civil and mechanical engineer, his varied career spanned a number of industries, including oil, gas, marine, and aeronautical.Â He started his career working for Union Oil Company; further positions included ones with Brundred Oil Company; a partnership with his father in Abilene, Texas; American Metal Climax;Â founder and Vice President of Ocean Science and Engineering; and President of Brittain Industries.Â  On June 11, 1953, he married Natalie Jo Logan, who he always called his “bride,” and remained happily married for 58 years.Â Making homes in Kansas, Texas, Connecticut, and Maryland, they returned to Tulsa in 1973 where they remained.Â He is survived by his beloved wife, Natalie, his four daughters, Merrilie Richards, Natalie Brundred of Santa Rosa, CA, Patricia Turner (Doug) of Newhall, CA, and Anne Hatton (Trevor) of London, England.Â He is also survived by his sister,Â Jean Brundred Murray (Jim.)Â He leaves ten grandchildren:Â Lindsay and Andrew Kashian, Jennifer Pilley (deceased) (Brad), Latham Turner (Natasha), Matthew Turner (Megan),Â John Turner (Tammy), and Alexandra, Christopher, Natalie and Timothy Hatton.Â His two great-grandchildren are Ashleigh and Haley Pilley.Â Â  Larry was a business entrepreneur whose great lifelong passion was flying.Â He owned a number of planes and flew extensively.Â He also held a variety of other interests, including skiing, golf, scuba diving, polo, tennis, sailing and wood working. He built three boats and an airplane in his spare time.Â He was always fixing things, a true “nuts and bolts” engineer.Â An optimist at heart, he loved life and was devoted to his family.Â A man of integrity, his gentle manner and keen sense of humor attracted others to him.Â Ever ready with a smile, he loved “his girls.”Â He will be sorely missed by those whose lives he touched. In lieu of flowers, the family has requested memorial gifts to the Tulsa Air and Space Museum.Â A service of thanksgiving will be held at Christ United Methodist Church,Â 3515 South Harvard Avenue, Tulsa, OK onÂ Wednesday, February 22, 2012, at 2:00 p.m. If you would like to record memories of Larry, please visitÂ www.floralhaven.com.

The family of Latham Loomis Brundred Jr. created this Life Tributes page to make it easy to share your memories.