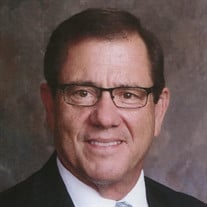 Laurence “Greg” Gregory Gaither passed away on February 8, 2022, in Muskogee surrounded by his family after a six-year battle with cancer which he fought with unparalleled grace. Greg was born on November 17, 1945, to Laurence Finley and Marianne (Anastasi) Gaither in Los Angeles. From age two, he was raised by his Grandmother Faye Farris, who raised him as “Mom”. Greg met Linda at Riverside Baptist Church and they married on May 20, 1966. They had fifty-five beautiful years of marriage. Greg served in the Air Force for four years in Vietnam. After his time serving his country, he attended university at Northeastern State in Tahlequah where he earned his undergraduate and master's degree in education and business and completed his doctoral work at Kansas University. He had an eleven-year career as a school psychologist and superintendent of special education and gifted program in Hill City and Baldwin, Kansas respectively. He then was given the opportunity to become a financial advisor with Edward Jones in Van Buren, Arkansas where he launched a thirty-seven-year career helping people in his community plan for their financial futures. He then took over the Muskogee Edward Jones office in 1988, where he became a Regional Leader. He retired from this position in the summer of 2021 after a full career of serving clients who brought him so much joy and laughter. Greg loved to fish with his friends and family, but particularly with his wife and nine grandchildren. He enjoyed hunting at Show-Me-Birds with his friends and Edward Jones buddies. Greg took a yearly fishing trip to Canada, loved to cycle and tend to his beautiful garden. He was active in his community and served as a Sunday school teacher for 40 years. He is survived by his wife Linda, three daughters, and their husbands; Lorie and Brian Callan, Amy and Roger Wahman, as well as Sunny and William Herron; nine-grandchildren, who loved him deeply, Jackson Wahman, Isaac Dennis, Katie Wahman, Abigail Dennis, Nicholas Wahman, Carley Callan, Caleb Herron, Alayna Wahman, and Samuel Herron. Greg’s family has requested that memorial donations be made to the American Cancer Society, or the local Gospel Rescue Mission in Muskogee, Oklahoma. Visitation will be 3-5 pm, Sunday, February 13, 2022, at Floral Haven Funeral Home. The funeral service will be at 11:00 am, Monday, February 14, 2022, at Grandview Baptist Church in Muskogee. To view the services via webcasting please use the link below: https://www.youtube.com/channel/UCfs4Wx2zBh5sa3zzTafOMDQ

Laurence &#8220;Greg&#8221; Gregory Gaither passed away on February 8, 2022, in Muskogee surrounded by his family after a six-year battle with cancer which he fought with unparalleled grace. Greg was born on November 17, 1945, to Laurence Finley... View Obituary & Service Information

The family of Laurence Gregory Gaither created this Life Tributes page to make it easy to share your memories.

Send flowers to the Gaither family.