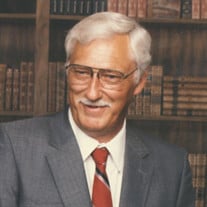 Laurence "Larry" Millard Neff, age 87, of Sapulpa, OK. passed away in Tulsa, OK. on Wednesday, March 11, 2020. He was born on May 18, 1932 in Wilson, Pennsylvania to Millard P. and Helen S. (Haas) Neff. After graduating from Will Rogers High School in 1952, Larry volunteered for service in the U.S. Navy. He served in the Pacific theater as a Pattern Maker 2nd Class aboard the U.S.S. Endicott during the Korean War. Prior to entering the military, he married Sue H. (Meredith) Neff. Although, after many years, their marriage, with regret, ended in divorce, together they raised two sons, Scott and Tracy Neff. After his military service Larry attended night school classes, for a time, with an emphasis on Engineering. In 1964, Larry and his father started L&M Pattern, Mfg. Co with a few pieces of equipment, 40 dollars and a dilapidated Studebaker pickup truck. From this humble beginning, Larry was on his way to becoming a businessman, an inventor and an entrepreneur. Subsequently, Larry would start a foundry that grew, with acquisitions, to become the five division American Foundry Group. In 1974, he also started a pipeline cleaning equipment company, S.U.N. Engineering, Inc., where he designed and patented the first reusable polyurethane cup for pipeline cleaning pigs, used primarily in the petroleum industry. This innovation was more environmentally friendly and economical for the industry. S.U.N. Engineering and L&M Pattern remain in business to this day and are run by his sons, Scott and Tracy Neff. His second wife and the love of his life, is Sandra M. (Griffin) Neff. With this marriage Larry became Dad, mentor and inspiration to four more children, Dean, Kandy, Angie, and Tammy. During this marriage, Larry would invent a patented panel to adapt wrought iron fencing for privacy. He and Sandy, along with her children, used this innovative product to start Hurricane Mfg. Co. which continues to be run by Tammy today. Larry's mind remained sharp and he never really fully retired and was still, enthusiastically, involved in business and pursuing new ideas until his passing. Larry had many interests and pursuits. He enjoyed fishing in Alaska, played the piano, became a pilot and was a yachting and motorcycle enthusiast. He had a close relationship with his brother Dale and had many friends. His greatest joy in his life was his family and he doted on all his children, grandchildren and great-grandchildren. Larry was preceded in death by his parents. He is survived by: his beloved wife, Sandra M. Neff; his brother Dale (Ginney) Neff and their daughter Kim (Michael) Bennett; his sons, Scott (Kaye) Neff and Tracy Neff; Scott's daughter Brooke (Nate) Hale, along with their three children Hudson, Asher and Isabella and Kaye's son Shane Stevens. Also survived by his children with Sandy, Dean (Donna) Elder and his children Brandi, Tessa, Kayla, Kira, and Brianna; Kandy Harris (Reece Deville) and her children Tiffany Taylor and Jay Johnson; Angie (Gary) Jones and their children Kacy, Justin, and Jaden; Tammy (William) Jones with her children Bradley and Brittnee and 20 great-grandchildren. Visitation will be 4-7 pm, Wednesday March 18, 2020 at Floral Haven Funeral Home. Funeral service will be 3:00 PM, Thursday, March 19, 2020 at Floral Haven Funeral Home Chapel in Broken Arrow, Ok. Officiant, Pastor Randy Lynn of Praise Center Ministries in Sapulpa, Ok. ***FOR THOSE THAT CANNOT ATTEND THE SERVICE IN PERSON, CLICK ON THE FOLLOW WEB ADDRESS: THE LIVE STREAM WILL START AT APPROXIMATELY 2:45 pm IF YOU DO NOT SEE THE LIVE FEED, PLEASE REFRESH THE PAGE UNTIL IT APPEARS*** http://webcast.funeralvue.com/events/viewer/26131

Laurence "Larry" Millard Neff, age 87, of Sapulpa, OK. passed away in Tulsa, OK. on Wednesday, March 11, 2020. He was born on May 18, 1932 in Wilson, Pennsylvania to Millard P. and Helen S. (Haas) Neff. After graduating from Will Rogers High... View Obituary & Service Information

The family of Laurence Millard Neff created this Life Tributes page to make it easy to share your memories.

Send flowers to the Neff family.