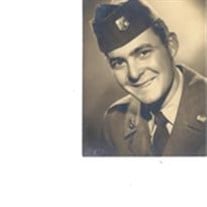 Lawrence P. Burkett passed away peacefully on May 29, 2008 at the age of 83. Born June 29, 1924, in Glenwood, Arkansas and joined the army May 13, 1943. He proudly served his country in the Philippines. He married Betty L. Hensley July 18, 1947, and they shared 60 years. He graduated from Oklahoma A&M College in Stillwater, OK on August 7, 1954, where he worked for the Clint Cooke Company for 16 years. In 1969, Lawrence and Betty moved to St. Croix, VI,US, where he opperated his own air conditioning company until his retirement in 1993. They have resided in Tulsa, OK since that time. Memorial services will be held 2:00PM Sunday, June 1, 2008 at Floral Haven Funeral Home Chapel. In lieu of flowers, family requests that donations be made in his memory to Clarehouse Capital Improvements, 7324 E. 49th PL, #3, Tulsa, OK 74145.Survived By: He is survived by: his wife, Betty; daughter, Pamela Hurd and husband, Robert; grandaughters, Stacie Leaton and husband, Raydon of Enid, OK and Heather Stepp of Orlando, FL; great-grandson, Nicholas Stepp and great-grandaughter Morgan Stepp; brother, Bob Burkettof Boulder, CO.

The family of Lawrence p Burkett created this Life Tributes page to make it easy to share your memories.