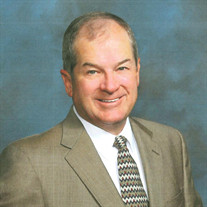 Lawrence “Larry” Patrick Moylan of Broken Arrow, OK passed away peacefully, surrounded by his children. After a valiant effort with brain cancer Larry’s journey ended on February 10th, 2022. Larry was born on February 7th, 1956 in Alton, IL to Franklin and Jane Moylan. Larry was a remarkable man, who lived an extraordinary life. He was thoughtful, kind, generous, loving, smart and had a contagious laugh that was heard across the room. He loved to do for others; which came in handy with five children. Growing up Larry was a dedicated altar boy at St. Mary’s Church, a good student, and a great friend. While in school Larry was very athletic; but what lit up his soul was golf. Excelling at golf in high school and college where he was a Junior College All-American. Even while qualified to play professionally, Larry chose to start a family and dedicate his career to military service. After his father passed in 1975, Larry enlisted in the U.S. Navy and became a Signalman. While serving on his first ship Larry saw the world, visiting ports in Asia, Africa and Australia. Upon completing his first stint of service, Larry attended college and worked as a commercial artist doing advertising in California. Re-enlisting in the Navy, in which he completed an additional 20 years, Larry served on the USS Antrim (FFG-20) as a Career Counselor. Larry was highly successful in his Naval career, earning three Navy Achievement Medals, three Navy Commendation Medals and his Surface Warfare Qualification. Larry met Jeanette Simon and married in 1984. They were blessed with five children. While growing his family Larry continued to pursue his education and attended seven colleges throughout the years while moving his family from Illinois, Florida, Alabama and finally retiring from the U.S. Navy, as a Naval Recruiter in 1996 in Tulsa, OK. Larry earned his Bachelor of Science degree in 1997; followed by a Master Degree in Business Management in 1998 both from Southern Nazarene University. Larry was undoubtedly a people person and used his honest, optimistic nature together with his recruiting skills to venture into the world of staffing. In 2007 Larry established his own successful business, Moylan Staffing Inc.; running it until he retired in early 2020. In 2005 Larry met and later married the Love of his life, Connie Paugh. In the time they had together they spent it well, laughing, loving and growing in their faith. Unfortunately, she passed too soon in 2010; he forever loved her. For Larry there were 3 essentials in life, God, Golf and Grandkids. Larry embraced his faith in every aspect of his life and always put God first in everything he did. Larry not only believed in God, he belonged to God. Larry was generous to a fault and was active in numerous charitable organizations and humanitarian causes. Above everything in his life, the love Larry had for his children was infinite. Larry was a father first; as a single father he made sacrifices, worked multiple jobs, always ensuring his children were cared for above all else. When you raise your kids right you get to spoil your grandkids and Larry adored all five of his. His child-like, playful side emerged whenever he spent time with his grandkids. Any spare time he had, he spent at the golf course. Getting to play courses around the world in the Philippines, Africa (Mauritius), Japan among many others, none were as beloved to him as the Patriot Golf Course. While a member of the Patriot, he won the Club Championship, the Senior club championship and the Wingman Tournament numerous times; as well as playing his lowest round of 63 and making some of his 8 lifetime hole-in-ones. Larry is survived in death by his five children-- Jennifer Moylan, Rebecca (Phillip) Mendoza, Megan (Adam) Thorne, Melissa Moylan, Michael Moylan and their mother Jeanette Moylan. Larry is further survived by his mother, Jane Schwartzkopf, brother Mike (Suzie) Moylan, sister Kathleen Buck, sister Connie (Bob) Schneider. Larry also leaves behind his cherished grandchildren-- Marcus, Braxton, Ethan, Lazarus, Magdalene and a grandson on the way. As well as many beloved family members and countless close friends. All are invited to join with the family in remembering and honoring the life of Larry Moylan. A Wake will be held at Floral Haven Funeral Home, 6500 S. 129th E. Ave, Broken Arrow, OK 74012 on Wednesday, February 16th from 5-7pm followed by a Rosary at 7pm. A Funeral Mass will be held at St. Benedict Catholic Church, 2200 W. Ithica St, Broken Arrow, OK 74012 on Thursday, February 17th at 11am. Military Honors to follow Mass, reception to proceed Military Honors. To honor his memory please consider making a donation to a charitable organization that was close to his heart -- Children’s Compassion International or Folds of Honor.

The family of Larry Moylan created this Life Tributes page to make it easy to share your memories.

Send flowers to the Moylan family.