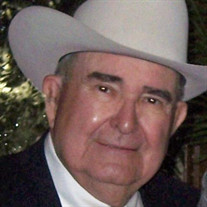 LC Neel was born at home on the family farm in Peggs, Oklahoma on July 28, 1925. He was the seventh child born to B.C. and Willora (Bee) Neel, and she prophetically declared him to be her lucky child. He passed peacefully into the presence of... View Obituary & Service Information

The family of LC Neel created this Life Tributes page to make it easy to share your memories.

LC Neel was born at home on the family farm in Peggs, Oklahoma...

Send flowers to the Neel family.