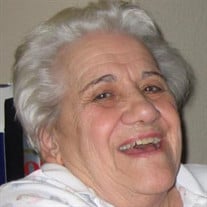 Lena Pucci Wallace, 94, of Tulsa, Oklahoma, peacefully passed away on Monday, December 21, 2020, with her family at her bedside. Lena was born on June 29, 1926, in Hooversville, Pennsylvania; she was one of eight children born to Italian immigrants Pietro Pucci and Cesernia Revello. After high school, Lena worked for the US Postal Service in Washington, DC, where she met and married Arthur Grey Wallace, Sr., DO, on October 13, 1950. Lena’s eldest son, Arthur, was born in Bethesda, Maryland before Lena and Arthur moved to Tulsa for Arthur to continue his osteopathic physician medical education. Lena had three more children, Victoria, William, and David, and worked as a devoted homemaker to support her family and Arthur’s career. Lena loved spending time with her family and especially her numerous grandchildren and great-grandchildren. Her love for babies and children was apparent and extraordinary. She was talented in the handcrafts of knitting, crocheting, and sewing gifts of dolls, clothing and quilts for family members, a trait inherited from her mother, and gardening, a trait inherited from her father. Lena enjoyed sharing stories while cooking great Italian feasts for her multi-generational family gatherings. Lena’s grandchildren fondly remember having sleepovers, doing craft and gardening projects with her, playing with her special collection of classic metal toy and wooden cars, and always being greeted with a genuine laugh, big smile, tight hug, many kisses, and a sweet dessert treat. Lena was preceded in death by her parents, Pietro and Cesernia, and her husband, Arthur Grey Wallace, Sr., DO. She is survived by her children Arthur Grey Wallace, Jr., DO, Victoria Ganjanathavat, William Edward Wallace, Sr., and David Nathan Wallace. She is very loved and will be greatly missed by her 10 biological grandchildren, 7 grandchildren welcomed to the family by marriage, and 16 great-grandchildren. In lieu of flowers the family ask that donations be made in her memory to the Tulsa SPCA or Oklahoma Alliance for Animals. No services at this time.

Lena Pucci Wallace, 94, of Tulsa, Oklahoma, peacefully passed away on Monday, December 21, 2020, with her family at her bedside. Lena was born on June 29, 1926, in Hooversville, Pennsylvania; she was one of eight children born to Italian immigrants... View Obituary & Service Information

The family of Lena Wallace created this Life Tributes page to make it easy to share your memories.

Send flowers to the Wallace family.