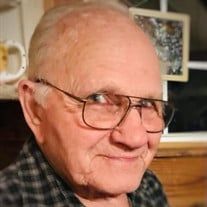 Leslie Dean Ashlock was 84 years when he went to be with the Lord on September 15, 2021, at home with his family. Leslie was born March 8, 1937, in Turley, Oklahoma, to Virgil and Opal Ashlock. When he was 12 years old and Lavona was 9, he told her when they were old enough that he was gonna marry her... and he did! Leslie married Lavona Ree Randolph on March 26, 1955, his bride of 66 years. Although they both had to drop out of school, 17 and 14 years of age, they entered night school until the birth of their first child, Yvonna, nearly 10 months later. Four years later came Sherrie, then the real surprise, Rusty, 12 years after. He frequently took the family to Chouteau Bend in the earlier years to camp out, swim, fish, and taught us all to ski. As the family grew and expanded, we began making trips to Tenkiller renting a family cabin surrounded by multiple tents. These family vacations were always noisy and chaotic, but created lasting memories for all of us. During this time Leslie was a faithful, hard worker at Hanna Lumber Company, Roadway, TOX, then Yellow Freight providing for his family. Even after retirement in 1996, he continued relationship with many of his fellow truckers and thoroughly enjoyed meeting for driver's breakfast. Other things he enjoyed in his free time, after maintaining good mechanics on cars and lawn equipment (his and others), were fishing, hunting, and frog gigging. Some of his most peaceful times were spent up in a tree enjoying God's creation while waiting for the prize of the day. Most times that 'prize' never happened but it didn't lessen his enjoyment of being out there. In later years, he began visiting nursing homes as more of his family members and friends resided there. Of course, Les used that time to learn the birth dates of many residents there to brighten their faces on their own special day. At home, he would entice whoever he could into a competitive game of farkel even though he was laughingly accused of cheating while he cracked up over his fictitious scores. Leslie was preceded in death by his parents, Virgil Leslie Ashlock and Opal Rose Seidlik Ashlock, and sister Darlene Stella Maner, and brother Ervin Lee Ashlock. Leslie Dean Ashlock is survived by his bride, Lavona Ree Randolph Ashlock, his daughter Yvonna Sue Smith, daughter Sherrie Renee Sjodin, son Rustin Dean Ashlock and his wife Lori; grandchildren Ryan Smith, Amanda Stevenson, Rachel Brown and her husband Jamie, and Sammy Ashlock; his great grandchildren Dayzie, Milly and husband Christian, Daphne, Ethan and wife Ashley, Caleb, Ashton, Roxie, Lilly, and Sharlett; and great great grandson Daniel. Leslie was survived by his brother Donald Ashlock, sister Waneta Wilkins, and brother Clarence Ashlock, as well as numerous family members and friends. The Celebration of Life service for Leslie Dean Ashlock will be held Monday, 2:00pm, September 20, 2021, at Rock House Church, 20402 East Pine, Catoosa, Oklahoma. In lieu of flowers, the family suggest donations be given to Rock House Church, PO Box 508, Catoosa, OK 74015.

Leslie Dean Ashlock was 84 years when he went to be with the Lord on September 15, 2021, at home with his family. Leslie was born March 8, 1937, in Turley, Oklahoma, to Virgil and Opal Ashlock. When he was 12 years old and Lavona was 9, he told... View Obituary & Service Information

The family of Leslie Dean Ashlock created this Life Tributes page to make it easy to share your memories.

Leslie Dean Ashlock was 84 years when he went to be with the...

Send flowers to the Ashlock family.