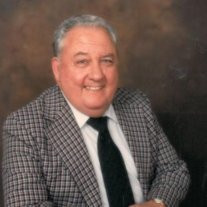 Leslie Ernest Miller, 86, beloved husband, father, grandfather, and brother graduated into the eternal presence of His Savior and Lord on August 11, 2013. Born on July 26, 1927 to Alvah and Matilda Miller in Colby KS. He spent his childhood and education days in the farm town of Wakeeney KS and at the age of 17, with the permission of his mother, joined the Navy and entered World War II. He served in multiple Construction Battalions, known as “the Sea Bees”, in the Pacific Theater for the duration of war. Returning to Wichita KS he met and married his wife Norma Jean on October 22, 1946. They were married for 57 years until her passing on July 27, 2004. He is survived by sons Steve Miller and wife KaJean of San Antonio TX and Mike Miller of Tulsa; daughters Sandra Stewart and husband, John of Tulsa and Shelley Fenimore and husband, Rick of Tulsa; 11 grandchildren, Krista, Lindsey, Nathan, Joel, Jay, Johnny, Michael, Kimberly, Whitney, Rick II and Cameron; 4 great-grandchildren, Kaleigh, Chase, Connor and Jordan; and sister, Luella Goddard of Tulsa. A self taught electrician and mechanic he moved to Tulsa in 1952 to begin work with Douglas Aircraft where he remained for 38 years retiring from McDonnell Douglas in July 1990 as an aircraft maintenance supervisor supporting research missions for the US Navy. He lovingly and faithfully supported his wife around all things concerning the family including Little League, Football and Basketball, Cheerleading, Scouting and those special times between father and his children. As a grandfather, he is remembered for gentleness, warmth, and special breakfasts. He loved reading and studying his Bible and was a longtime active member of Nogales Ave Baptist Church, where he served as an Ordained Deacon and Sunday School teacher giving and receiving immeasurable love, comfort and rich fellowship. He will be deeply missed but for those who know his Lord we will spend more time in heaven with him than the time we miss him on earth. Funeral service will be held 12:30 PM, August 16, 2013, Floral Haven Funeral Home Chapel in Broken Arrow, OK.

Leslie Ernest Miller, 86, beloved husband, father, grandfather, and brother graduated into the eternal presence of His Savior and Lord on August 11, 2013. Born on July 26, 1927 to Alvah and Matilda Miller in Colby KS. He spent his childhood... View Obituary & Service Information

The family of Leslie “Les” Ernest Miller created this Life Tributes page to make it easy to share your memories.