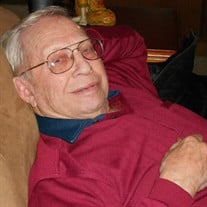 Lester Wayne Frohrip, age 93, moved on to heaven December 28, 2020 in Tulsa, Oklahoma while residing at Southern Hills Retirement Center. Lester was born January 29, 1927 in Morgan Minnesota. He married June Renneke on February 7th, 1953. Lester farmed in the Morgan/Franklin Minnesota area where he was active in Full Gospel Business Men’s International, Gideons and Church of The Living Word. He was also active in Farm Bureau, Toastmasters and was a pioneer in large scale organic farming. He hosted both international and US based farmers to educate them on new farming techniques. In 1983, Lester and June moved to Tulsa, Oklahoma to be closer to family. They both were employed by Metro Christian Academy until their retirement. Lester was a member of Breakthrough Church where he had many friends whom he deeply loved. Lester was preceded in death by his wife, June, his sister, Lois Ziegenhagen and son-in-law, Branden Jones. He is survived by his four children, Jim (Leah) of Sand Springs, David (Mary) of Broken Arrow, Mary Jones of Chattanooga, TN John (Julie) of Tulsa, and his sister, Gloria Just (Vern) of South Dakota. Also surviving are 7 grandchildren and 4 great grandchildren. In leu of flowers, please make donations to Break Through Church 9123 E 22nd Pl Tulsa, OK 74129 Viewing will be held Wednesday, December 30 from 1 - 6 PM with Family to receive friends from 4 -6 PM. Private Family Services scheduled.

The family of Lester Frohrip created this Life Tributes page to make it easy to share your memories.

Send flowers to the Frohrip family.