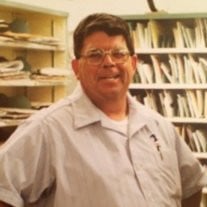 Lester “Van” Glennon, age 74, passed away at his residence in Tulsa, Oklahoma on December 17, 2013. Van was born on February 7, 1939 in Lawton, Oklahoma to his parents John and Enid Glennon. He was the seventh child born of out ten children. He attended his schooling at St. Mary’s after which he began his career as a postal worker. Van retired in 1997 after working with the Postal Department for 37 years. Van married Alice “Irene” Johnson on October 17, 1971 at Bristow Trinity Baptist Church. He joined the Air Force on a tour of duty from 1958 to 1962. Van was a hard worker who loved his family and his children. He also loved music (especially record albums) and watching Sooner Football. Van is survived by his spouse, Irene Glennon, his daughter, Teresa and spouse Dan Phipps, his son, Michael Glennon, his daughter, Joy and spouse Chad Stokes, his grandchildren, Gabriel and Sarah Phipps, and Jerimi and Reese Stokes, his brothers, Richard and spouse Lorretta Glennon, and John and spouse Reon Glennon, and his sisters, Ruth Dodson, Esther and spouse Dave Hughes, and Rachael and spouse Donald Beveridge.

The family of Lester “Van” Glennon created this Life Tributes page to make it easy to share your memories.

Lester “Van” Glennon, age 74, passed away at his residence in...