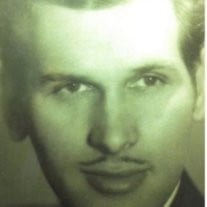 Lester L. Mayo Lester Lee Mayo was born October 26, 1920 in Zillah, WA to the union of Jack Mayo and Florence Coates. Les accepted Christ as a young man and later led his mother to Christ. He had a beautiful tenor voice and used his gift for the Lord all of his life. Les joined the Navy while in high school on August 29, 1942 in Seattle. He was honorably discharged on November 18, 1945 in Bremerton, WA. His rank was Seaman 1st Class. Les met the love of his life, Melba (Mickey) M. McAdams in a young adult group at the church they both attended. They wrote to each other while he was away in the South Pacific during World War II and later proposed over the phone. Two weeks later, they married on April 28, 1945. His lifelong friend, pastor and mentor, Wes Alloway officiated ceremony. From that union they had 3 daughters: Mardelle Swan (Louis); Merrilee Knaus (Bill); and Michele Sprague (John). They had 5 grandsons: David Swan (Lisa); Bobby Knaus (Genevieve); Taylor Sprague (Lindsey_; Tanner Sprague and Torrey Sprague; and one granddaughter Kimberly Brightman (Del); two great grandsons Joshua Swan and Jacob Swan. After his discharge, Les, Melba and their oldest daughter, Mardelle, went to Alberta, Canada for Les to attend Three Hills Seminary Bible School. It was in Alberta, Canada that Merrilee was born. After returning to Washington state, Les worked for the Seattle Public Schools and Seattle Central Community College as an operating engineer and master gardener. He retired after 25 years of service. He continued to work full time at the YMCA in West Seattle and retired after 20 years of service 2 years later. Les loved to paint and draw and gave away most of his work to family and friends. He had a love for gardening and roses. This hobby led to a lifelong friendship with his good friend, Jerry Rosso. Les had various hobbies over the years: handmade ladies hats, tied fishing flies, crochet, painting, ceramics, roller skating, racket ball, tennis, chess, checkers, ping pong and singing. He became a skate dancer and competed in tournaments. He later served as a skating judge. On May 9, 1995, Les and Melba celebrated their 50th wedding anniversary with a trip to Australia. Their daughter, Merrilee (and husband Bill), joined them. Les returned to the cities where he had been stationed during the War and found the church he had attended while at Brisbane. Les and Melba were married 53 years when Melba passed away. Les enjoyed staying with his daughter Michele and her family in Tulsa, singing in the choir at Liberty Church and attending the Broken Arrow Senior Center. In later years he enjoyed playing cards, reading books, listening to music and painting.

Lester L. Mayo Lester Lee Mayo was born October 26, 1920 in Zillah, WA to the union of Jack Mayo and Florence Coates. Les accepted Christ as a young man and later led his mother to Christ. He had a beautiful tenor voice and used his gift for... View Obituary & Service Information

The family of Lester Lee Mayo created this Life Tributes page to make it easy to share your memories.