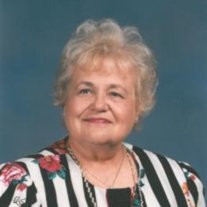 Leta Lou Rife Pitts, 85, of Tulsa, Oklahoma, recently of Mountain Home, Arkansas, went to be with the Lord, Sunday, March 10, 2013 at Hospice of the Ozarks Hospice House, in Mountain Home, from complications of a recent stroke. She was born January 31, 1928 in Rogers, Arkansas to Fred and Ella Morris Rife. She moved to Oklahoma as a child and graduated from Ketchum High School, Ketchum, Oklahoma. Leta married Roy Pitts on April 16, 1949 in Miami, Oklahoma. They were married 46 years before his death. Moving to Tulsa in 1953, they considered Tulsa to be their home. Leta was a retired switchboard telephone operator. She began working for the Southwestern Bell Telephone Company in Vinita, Oklahoma after high school graduation. She first transferred to Oklahoma City then to Tulsa with Southwestern Bell before retiring after 17 years. She then went to work for North American Rockwell as a switchboard operator and worked there for 20 years before retiring in 1984. Upon retiring from Rockwell, she worked as a part-time switchboard operator for Childrenâ??s Medical Center and Doctorâ??s Hospital. She was a longtime member of Calvary Baptist Church but after her husbandâ??s death, became a member of Southern Hills Baptist Church. Leta loved spending time with her family. She considered being a wife to her husband and mother to her two children her most important roles. Leta enjoyed traveling with her family. She visited all 50 states, many of them more than once. She also enjoyed playing Bingo. Leta had many friends. She was known for her sweet, caring personality and her wonderful sense of humor. She was loved by all who knew her and will be greatly missed by all her family and friends. She was preceded in death by her parents, husband Roy, son-in-law David Robinson, 3 brothers and sister-in-law, one brother-in-law and his wife, 2 nephews, and 2great-nieces. She is survived by son Jim of Bixby, daughter Karen (Patrick) McKaig of Mountain Home, granddaughter Diana Inks (Billy) and 3 great-grandchildren Jaden, Gavin and Ciera Inks, of Tulsa, and several nieces and their families. Funeral Services will be at 10:00am Thursday, March 14, 2013 at Floral Haven Funeral Home, Broken Arrow, Oklahoma with interment following at Floral Haven Memorial Gardens.

Leta Lou Rife Pitts, 85, of Tulsa, Oklahoma, recently of Mountain Home, Arkansas, went to be with the Lord, Sunday, March 10, 2013 at Hospice of the Ozarks Hospice House, in Mountain Home, from complications of a recent stroke. She was born... View Obituary & Service Information

The family of Leta Lou Pitts created this Life Tributes page to make it easy to share your memories.